You thought you knew his secret identity, but you didn’t know his secret secret identity. Am I trying to create nightmare fuel for people? Yes. Yes I am. This is honestly all I could think about the whole time I was drawing this:

Nile smashed me out a review of the game below. The TLDR version is: It’s great. You should play it.
A couple personal notes about the game, The story segments are expertly spaced. A person with a day job and maybe only an hour in the evening to themselves will hit all the main story beats in that period of time, as well as having some decent mucking around time in the city. Their ability to get bite sized chunks of story as well as some truly cinematic moments into each session is flawless.

Nile also mentions some frame stuttering occasionally. I played Spiderman on the Pro PS4 and I haven’t noticed any of that business going on.

My only complaint about the game is that I really don’t want to be taken away from all the web slinging in favour of some mandatory pipe puzzles. 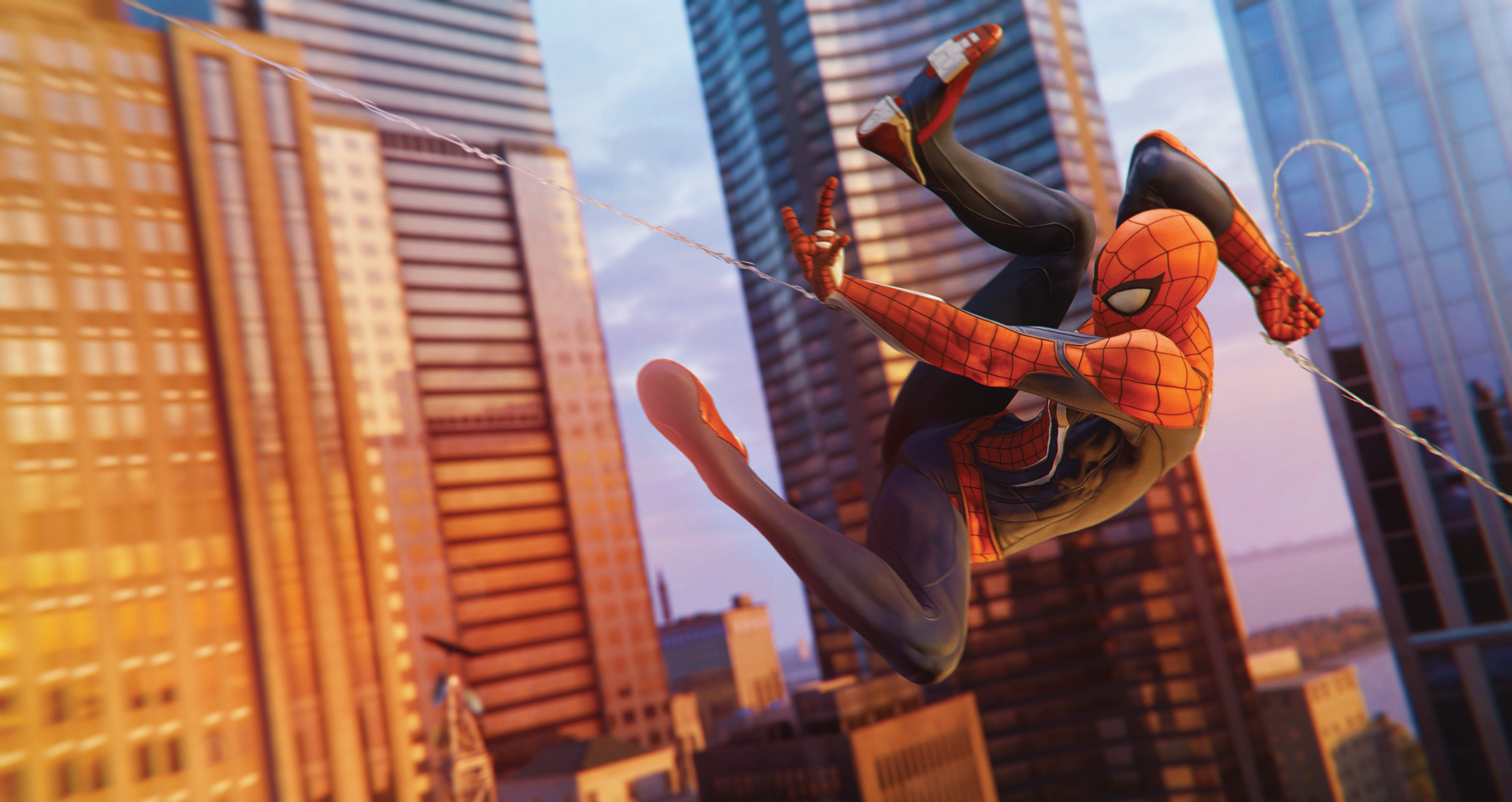 I’ll kick this review off by admitting I am a massive Spiderman fan. Like so many before me, I was suckered in by Peter Parker’s relatability, his clear flaws but his constant desire to do good. A drive to change the world for the better and how persistently he is challenged in his quest, how the character could be me in another life, and how I could be him. Next to other superhero heavyweights like Superman or Batman, Spidey felt intensely, uncomfortably real.

While some media portrayals of the wall-crawler have been, er, less-than-stellar (looking at you, Spiderman 3), and it’s seen more reboots than any franchise should ever see, I had hope for the PlayStation 4’s kick at the ball. Why? Insomniac Games developed it.

Insomniac Games has been with Sony and PlayStation since forever, and given us timeless titles like Spyro the Dragon, and Ratchet and Clank. Those two games were part of so many kids’ childhood, basically the video game equivalent of The Simpsons. Insomniac, then, knows fun. It knows what makes a game tick, how to keep players coming back for more. And, I’m happy to report, Spiderman is another trophy for the cabinet.

The gameplay is fluid, with maybe a dozen loading screens throughout the entire campaign. More if you use the fast travel system but swinging through the city is so addicting you probably won’t bother, aside from getting the trophy. I did experience a few stutters in more demanding scenes, and the odd HUD glitch but nothing worth patching. The story breathes nicely, with pauses in between major parts to let you roam Manhatten as you wish. Heroic music kicks in when you leap off a building and let loose some webbing, while Spidey’s voice actor Yuri Lowenthal was asked to record parts of his dialogue twice to reflect if Spiderman is mid-swing or just lounging on the ground. There are so many little things like this that show how much love and effort Insomniac put into the game, like the fake Twitter feed. Side note, J.K Simmons is not back to reprise his role as J. Jonah Jameson. Sure sounds a lot like him, though….

The breadth of activities throughout the city should keep players busy after the final curtain call. Picking up old Parker backpacks gives you a little glimpse of his life – like finding the final ball game ticket Uncle Ben took him to, or the OG underam webbing – and also work towards unlocking more suits.

The game looks stunning, although not quite as good as something like God of War. There are still moments that have you pausing stopping a robbery or having a breather on top of a skyscraper just to have a look around.

Speed is well represented, with satisfying momentum transfer between each swing and little effects added to a well-timed leap. Plus, if you don’t dive-bomb off Empire State, are you really playing a Spiderman game right?

Little prompts remind you that there is a world beyond the campaign and that you’d be better off, in the long run, taking the time to explore.

Speaking of the plot, the writing is brilliant. It ebbs and flows like the comics it is based on, doesn’t lean on humour as a crutch, and by the end, you feel the pain the characters feel. I’m mainly referring to Parker agonising over choices none of us hope to make, emphasised by his ever-present inferiority complex. And those who aren’t a fan of actually making choices in a video game, don’t worry. But I digress, this is a video game review, not a psychological assessment of a sociological phenomenon.

Playing through the story will set you back about eight hours in total – it’s not long. However, the story is somewhat linear. A little variance wouldn’t hurt, like a “choose your path”, ‘Goosebumps’ type of thing. DLC is on the way too, which should beef up the game again. Hopefully they will arrive with patches ironing out framerate drops. I’m playing on the standard PS4 and the game has a tendency to drop below 30fps when more than a two or three things happen at once.

All in, Spiderman is a triumph. Little (and I mean little) glitches and a safe main story aside, it’s no wonder the game has already beaten God of War’s sales record. This is easily the best superhero game yet, and possibly one of PS4’s greatest hits.

0 Thoughts on Whatever Spiders Can