I had a LAN party last night playing a lot of Golf With Friends and Mario Party, so I don’t have a lot to say right now, so instead I’m going to hand things off to Nile Bijoux who has brought us another review. This time for the ah, disastrous Fallout 76. The PC setup grief is strong in this one. 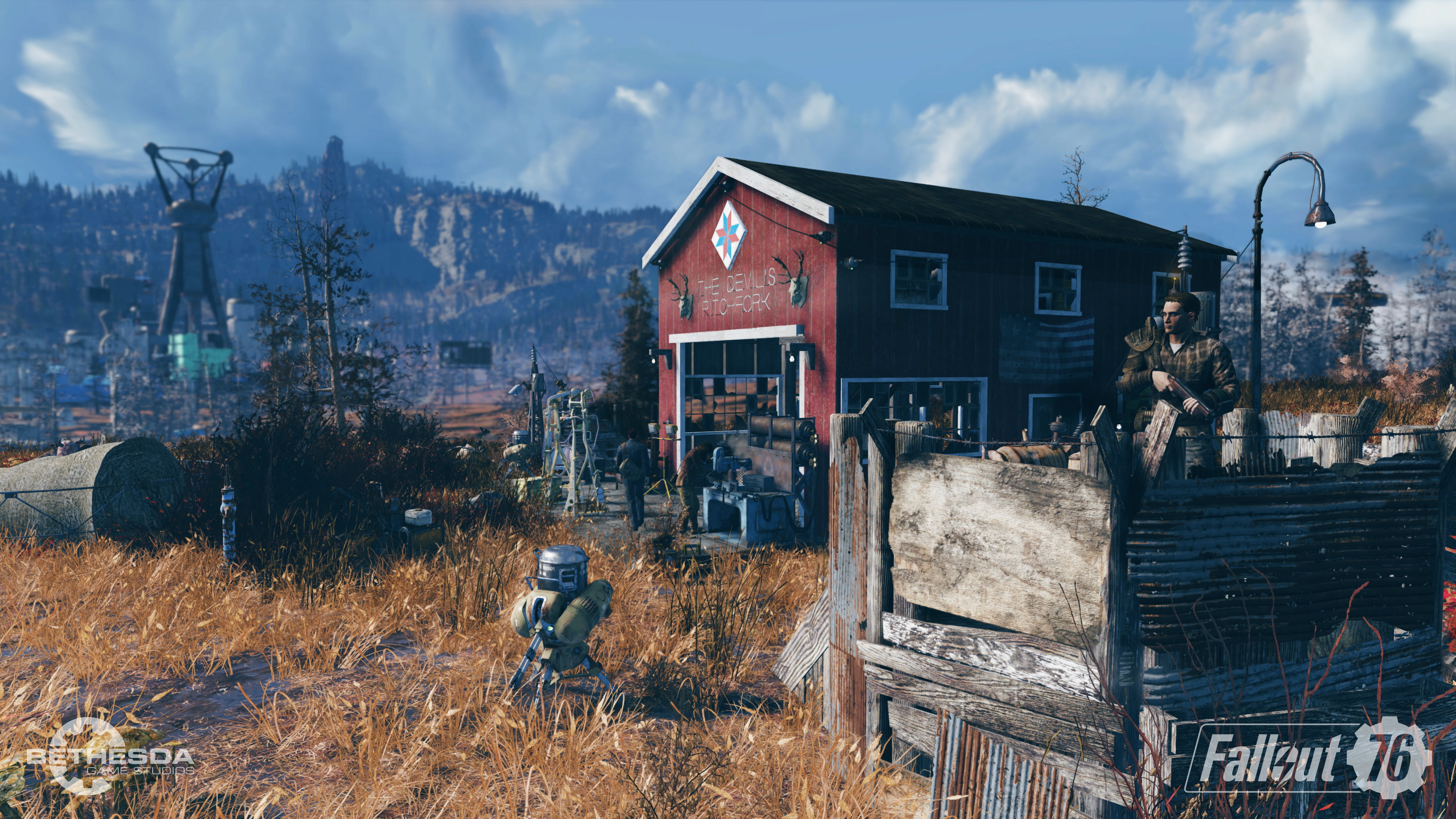 Fallout 76 should have been the Fallout we’ve all been waiting for. A Fallout-based MMORPG of sorts, with thousands of players interacting and playing together. Instead, it’s a bit of a mess.

Let’s not beat around the bush. Right off the bat I had issues convincing the Bethesda launcher to complete its installation – I still don’t know how I fixed it. Why not just use Steam? 76 is the only game I need the Bethesda launcher for, now that Quake Champions is on Steam. Why does every publisher need its own launcher? That’s another rant in and of itself, so I’ll try to stay on topic.

Booting the game gives a lovely view of some autumnal forests in  ‘Appalachia’, Bethesda’s version of West Virginia. The leaves and branches are 2D, and the fact that I can see that in the very first in-game scene doesn’t strike me with much confidence in the aging Creation engine. I’m playing on PC so naturally I want to see what settings I can tweak. I want to switch V-Sync off – no option. Okay, no big deal, I can live with the slight input lag, but can I at least crank the graphical fidelity? No. That’s 76’s version of Ultra. Ah.

Righty ho, that’s a bummer, let’s get into the game. Usually mashing Escape gets me back to the main menu… why am I still staring at fade distance sliders. Is my keyboard broken? No, Fallout wants me to use Tab to reverse through menus. That’s annoying. That’s like getting a new car and finding it has a lever brake like a bicycle.

Getting into the game is easy, just hit Play. It finds a world quickly and drops you in. Starting off is like any other Fallout game – there are heaps of player customisation options, and they’re all nice and easy to use. The S.P.E.C.I.A.L stats are back in force, which lets you customise your characters strengths and weaknesses.

The intro level is you navigating the aftermath of what looks like a killer party, picking up the starting equipment while robots tell you the ins and outs of the new game. Cool, looks good, let’s explore!

Fwoosh, the door rolls back, screen fades to white,

you take your first shaky steps in the new world…

I’ll let you find out the rest. Why? Because that’s largely where the “campaign” ends. After you walk out into Applalplaplapchia, the quests are yours to figure out. There’s a guideline Overseer quest which will take you through the basics of the game and offer some fresh narrative, but from what I can tell, you don’t actually have to do it. Oh, and there are no NPCs at all. That means little to no current lore – plenty of “what happened before the bombs fell” stuff, though.

I got partway through another secondary quest but after searching through a town with a stream in it, my frames dropped from a steady 60 down into single digits. I found that the stream was the cause of the issue, so I had to ditch the quest, at least until Bethesda fixes it. Add to that, for whatever reason, right in the middle of the town was an overworking spawn for some hostile farm bots who refused to let me stutter my way around. Trying to shoot upwards of ten robots at eight frames per second is nigh on impossible, and I ended up force-quitting out of frustration, after bellowing at my screen and scaring the dog.

That enemy overkill looks to be universal for one reason or another, I presume to do with trying to give a bunch of players a bunch of things to shoot. A bunch of scorchers (undead mutant things) with guns (why) absolutely destroyed me during another performance drop.

I think Bethesda really likes FXAA because the whole screen looks like it’s had a jar of Vaseline smeared all over it. My monitor is bad but not THAT bad. It makes depth of field look nice and smooth but object pop-in is still there. More fun is enemy pop in, which makes the game more like a mediocre jump-scare horror game.

Part of that was to do with the game resetting my sensitivity to much higher than I normally use, and part of it was down to the new VATS system. In Fallout 3 it froze time and let you pick critical parts of an enemy to shoot. Fallout 4 reworked it slightly to slow time instead of outright stopping it, which meant you had to think a little quicker. Fallout 76 has changed it again, and ditched the entire concept of changing time because the old versions wouldn’t work in multiplayer. Things happen as normal but a little chance bar comes up showing how likely it is you’ll hit the enemy, then you shoot. I didn’t realise this – the game doesn’t make mention of the new system – and proceeded to get my ass handed to me as I stood there like a grinning village idiot.

Remember the “Tab to Escape” thing from before? Hit Escape during the game and you see the game map. Huge area with plenty to explore, which is awesome and exactly what you want in a game like this, but what if you want to get into the actual pause menu? Hit Z. Intuitive, right? And by the time you’ve figured that out, more ghouls have come to suck your brain out of your ears. Enjoy paying caps to respawn.

Sprinting in a Fallout game has long been a thorn in my side. 76 doesn’t help. I get that the idea is to funnel level-up points into the stats you use most, but waiting for AP (Action Points) to recharge takes notably longer than you can sprint for. That’s just bad design. The map is massive – let me run for longer than three seconds! 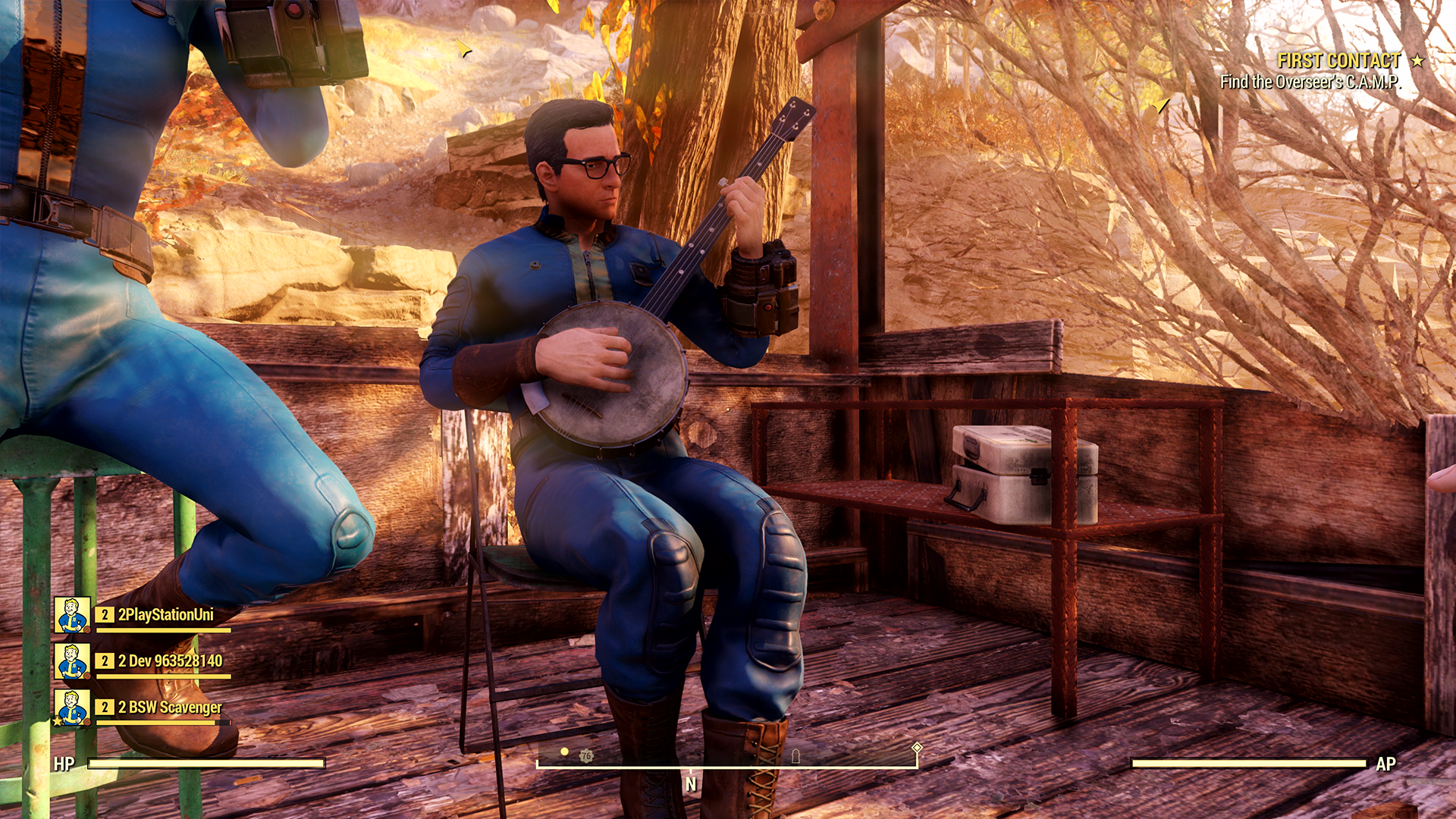 Then comes the realisation. This world is socially barren. The lack of NPCs means there’s nothing really going on. Other Fallout games felt alive. They felt like you could jump in and learn about this whole new post-apocalyptic lifestyle and be a part of it, not just scavenging for new parts to sink into armour or a new gun. Because that’s what I ended up doing. The interesting new areas you can find became grind-fodder, as do the quests.

Honestly, a huge step would be to bring back NPCs, even just a dozen, and introduce some sort of storyline. Warframe has pulled off the multiplayer-singleplayer blend nicely, and that’s a step above a successful indie game.

While there’s more I could say, I need to keep to a word limit. I’ll finish by saying that the core of Fallout 76 is not a bad premise, and one that I would normally very much enjoy but – and this is rare – Bethesda missed the mark badly. There’s so much potential here, there really is. But sadly the performance issues are still present after the massive recent patch, just north of 15GB for me but up to 47GB for those on consoles. The gameplay is underwhelming, the gunplay especially so. Visuals would pass in 2015 but are woefully outdated now, especially next to something like Battlefield.

Exploring Appalachia should be a beautiful experience, and sometimes it is. More often though, it’s just frustrating. The foundations are there for a great game. We’ve seen developers bring a game back from the brink in No Mans Sky, we’ve even seen Bethesda do it with Elder Scrolls Online. Hopefully, one day, 76 will be a cosy regular in my ‘to-play’ list.