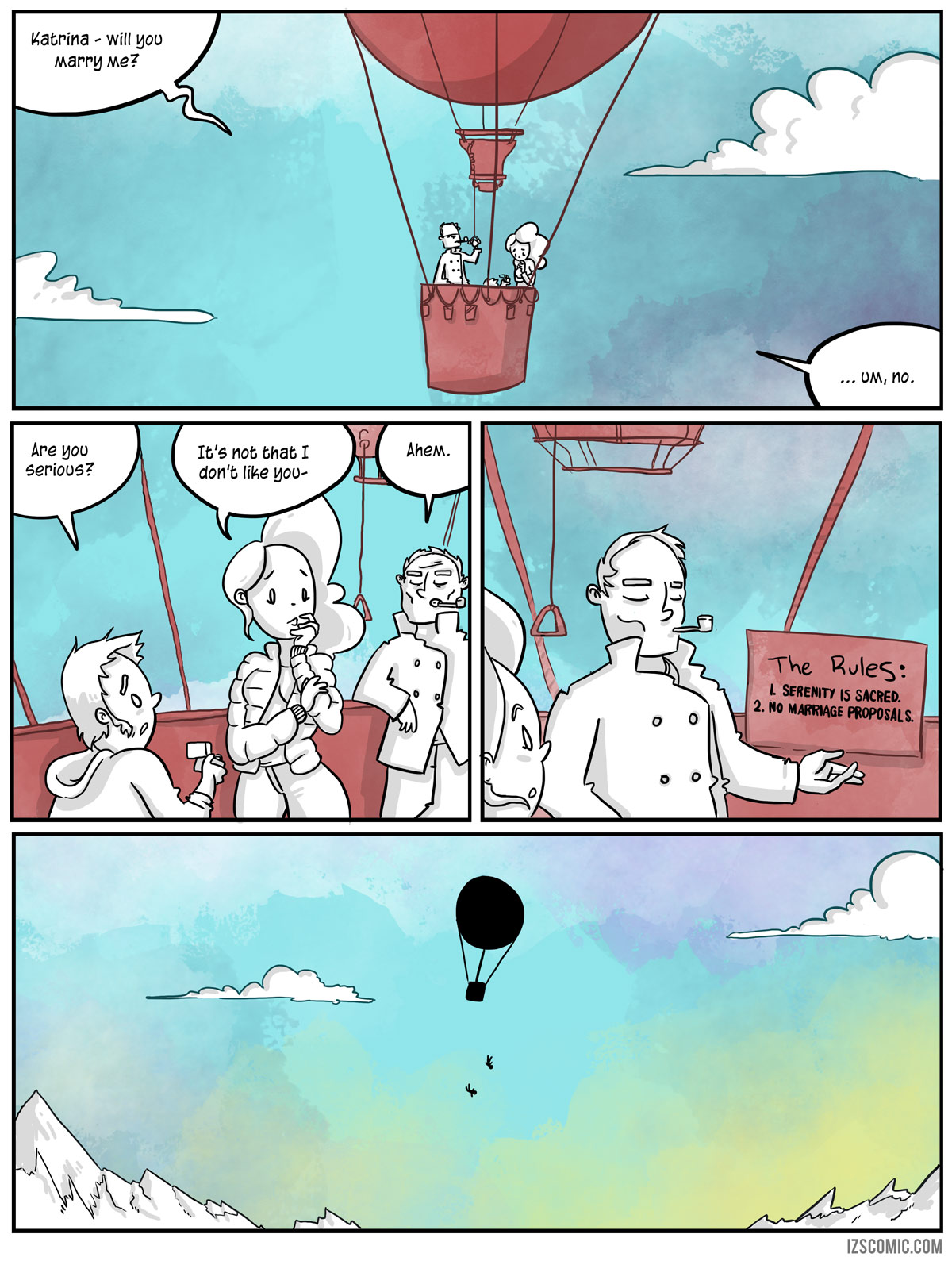 Izak can claim credit for the original idea on this one. There were a bunch of different endings that we bandied back and forth, including one where the balloon went all the way into space and all their corpses were just floating around, but in the end this version won out.

What a stupid, stupid place to propose. I mean, everyone who gets on one knee for a marriage proposal is sure they’re not gonna be turned down, but the reality is that some people do. You have to plan for that shit. And ideally that planning should not include being stuck in a small enclosed space with the person who may turn you down, plus at least one other random stranger. Fortunately the balloon captain in this case executed an elegant solution which ceased the suffering of all three participants. What a good guy.

Oh and just because I have the power to suggest music to you all, here’s a balloon song that’s currently infesting my head.

Izak Edit: Yeah and because I have the power to edit posts I’m just gonna say that we have a new item in stock in our store. Meet nimbutt, the little cloud guy in the picture below. He’s perhaps my most favourite piece of merch we now have.

Thank you SO MUCH for all the lovely treats, @IAmTwoMermaids!! I love the stickers and comix and the pin came out PERFECT! 👌🏼 pic.twitter.com/DpN6xTlUa1

We’ll be talking a little more about him in the coming days, but I think Becky did an awesome job on him.

↓ Transcript
Wide shot of a hot air balloon floating above a majestic mountain range at sunset. Speech bubbles come from the basket.
“Katrina - will you marry me?”
“... um, no.”

A man is on one knee looking very affronted. Katrina is pretty unhappy too.
“Are you serious?”
“It’s not that I don’t like you-”
The balloon captain, a grizzled fellow reminiscent of a crusty sea captain, interjects.
“Ahem.”

The captain points to a prominently displayed board:
The Rules:
1. Serenity is sacred.
2. No marriage proposals.

A full panel gives an expanded version of the first panel, with the mountains and sunset looking their best. It is very beautiful. Two bodies plummet toward the ground below.