Omega Strikers is a new 3v3 f2p hero based soccer brawler from some studio you haven’t heard of. Till now. Odyssey Interactive, a new studio made up of Riot devs who are sick to shit with working on League of Legends. I’ve seen the word MOBA used in relation to this game but that word reminds me of a bunch of games I hate. And Omega strikers reminds me of a bunch of games I like. For instance I feel like it’s a cross between Brawl Stars and Video Ball except with less memorable music. Wait is Brawl Stars a MOBA? Fuck! Ok yeah Omega Strikers is the very definition of a Multiplayer online battle arena.

The game dropped last week into beta. You have a super tight roster to choose from with a new character dropping every 3 or 4 weeks till the end of November. Unfortunately these characters aren’t unlocked from the outset. they want you to keep coming back so most of the heroes are locked behind the grind or your mum’s credit card. At the moment additional heroes are 10k Omega bucks or whatever the fuck they call them, and you can just about rack up 500 tokens per round. Starting out the game it gives you a bunch of little missions to do to get you acclimatized with all the various menus, netting you enough to buy 2 or three heroes in one sitting, this will be enough to get your roster fleshed out enough to give you some flexibility for every situation.

Despite having to grind or buy additional heroes the monetization model is about as ethical as it can be for a F2P game. There are no “surprise mechanics”, loot boxes, or any other marketing terms for gambling to be found anywhere. You simply buy what you want, or grab the battlepass. I dig it.

Rounds take about three minutes, and will end prematurely if you hit 5 goals first with a 2 goal lead. Otherwise it’ll keep running till someone hits the lead or time out. Games are tight and scrumptious, giving you just enough to make you keen for just a couple more.

The depth of strategy goes a lot further than it initially appears on the surface. Watching people slowly learn how to play since it dropped on Steam has been fascinating. People started out just chasing the ball around popping ults and secondaries willy nilly. Pretty much just focusing the ball at the expense of all else. In competitive they’re veritable monsters knowing they can stun or kill the opposition temporarily to give themselves massive openings. Once you realise the stark difference between offensive and defensive heroes you start finding a groove much easier.

On top of your hero picks each hero can have their own set of customisable perks, known as trainings, which gives your character an extra little edge and flavour here and there to suit your playstyle.

The designs are chefs kiss level waifus. You’ve got bargain bin Tracer as the face of the game, alongside a motley crew of furries and vaguely futuristic fuckboys & girls. 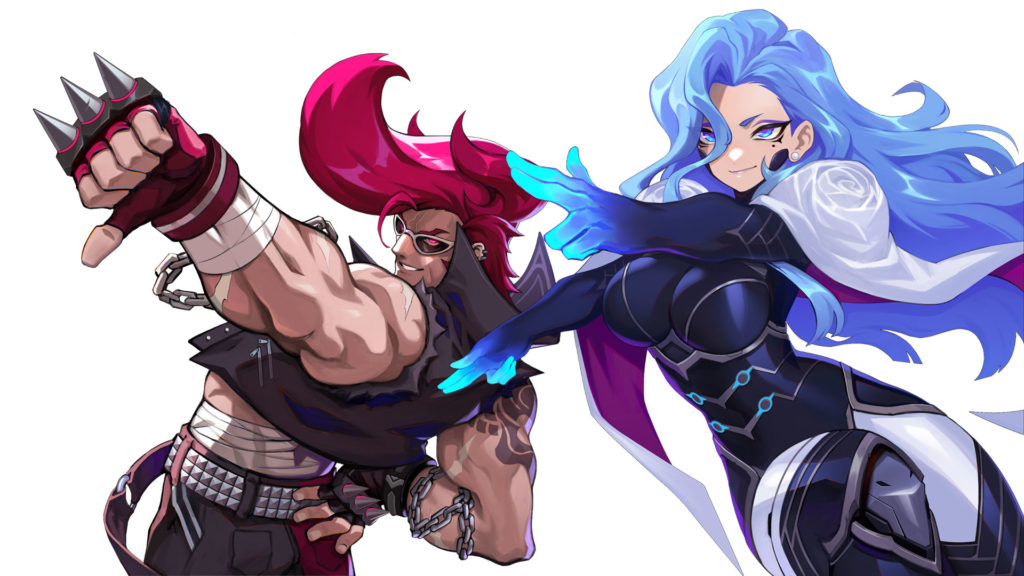 “We wanted to create something that had broad appeal and accessibility. We didn’t want to go down a dark, gritty fantasy route. We wanted to create, like, a — we call it a hopeful and energetic view of the future. A mix of Splatoon and Overwatch kind of put together,” Dax Andrus, co-founder of Odyssey Interactive told Polygon. Well they nailed it, it has a friendly atmosphere that isn’t above injecting you to the brim with adrenaline when you’ve been queued as goalie against an aggressive team.

I’d say that the community at the moment is as wholesome as it can possibly be, and I don’t seeing it turn toxic like Overwatch eventually did post launch due to a lack of ingame chat. People are limited to spamming png emotes, which generally get solid use when someone scores and the camera zooms in on them. A good team naturally clusters around the scoring player like it’s a soccer match celebrating them, with the occasional opponent getting caught up doing a respectful amazed emote. Honestly this has been the first time in a long time I’ve wanted to unlock pngs to spam. You can pack some real personality in there that is somehow a refreshing change from the smarminess of Fortnite dances.

You can see that this is going to be a super mobile friendly game when the devs finally deliver it on mobile, and I think this is where it will probably find it’s primary core audience.

But you should definitely check it out if you’re looking to throw down with a couple friends, or even solo. Omega Strikers just wants you to have a good time, and I’m down for that.