NZ's Meth Problem, And What We Should Do About It
Gaming Music Lost Gems: Super Mario Land End Theme
Politics May 3, 2021
Share

If you’re like me (I guess you probably aren’t) you live in a country that’s pretty isolated and had a faaaairly snappy Covid response, resulting in hardly any COVID-19 cases at all. Living in such a chill place can easily lull you into a know-it-all mentality – which tends to raise its head when new lockdowns occur. Hand wringing about the economy is a common go-to, as well as comparing COVID-19 with the common flu. “It’s just another flu, right?” Actually, there’s a good answer to that question. Let’s take a look at some info that’s not sourced from Facebook, for a change.

First, let’s find out how many people die of the flu each year. Let’s take the highest number as our main example. In the 2017 to 2018 (United States) flu season, 61,000 people carked it. On a global level, WHO estimates that “Every year across the globe, there are an estimated 1 billion cases, of which 3 to 5 million are severe cases, resulting in 290,000 to 650,000 influenza-related respiratory deaths” each year. Let’s go with the upper estimate for the flu. Actually fuck it, let’s make it 700,000 – make it a real corker of a year for the flu, a real watershed moment for influenza’s battle against humanity. 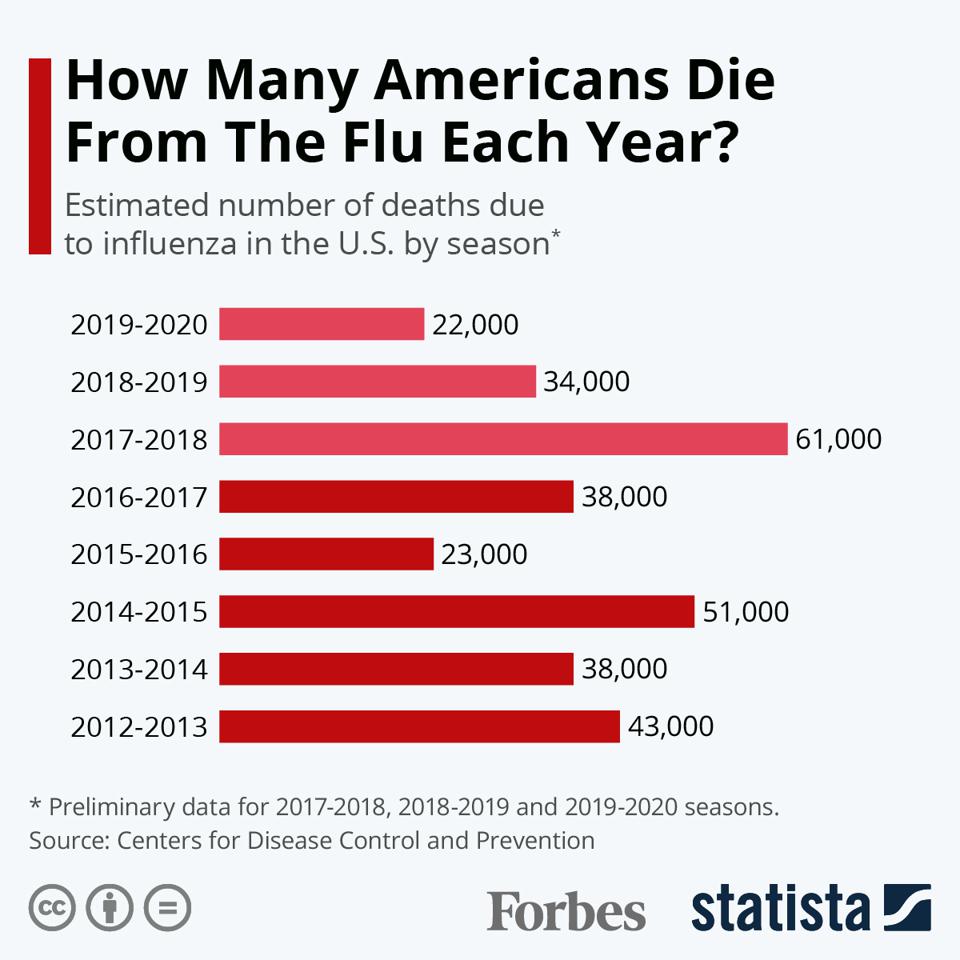 Now let’s find out how many people died of COVID-19 in 2020, since that year is the only one we have a complete dataset for.

At the time of writing, the CDC website is fucked (at least from my end) so you’ll have to forgive the second-hand linked data. China saw its first death on January 11th. By the end of the year there had been 1,833,978 deaths associated with the novel coronavirus (2.6 times more deadly than little old influenza). Zooming in a little, America saw 360,255 deaths due to COVID-19 by the end of the year. That’s almost 6 times higher than the flu’s high score. So globally we fluffed the numbers for the flu up to 700,000, and pumped the American count up to 61,000. But wait a second! These fluffed numbers are already fluffed to fuckery!

“These coefficients are based on assumptions of how many cases, hospitalizations, and deaths they believe went unreported.” says Jeremy Samuel Faust, MD. “In the last six flu seasons, the CDC’s reported number of actual confirmed flu deaths—that is, counting flu deaths the way we are currently counting deaths from the coronavirus—has ranged from 3,448 to 15,620, which far lower than the numbers commonly repeated by public officials and even public health experts.”

“In fact, in the fine print, the CDC’s flu numbers also include pneumonia deaths.”

“If we compare, for instance, the number of people who died in the United States from COVID-19 in the second full week of April to the number of people who died from influenza during the worst week of the past seven flu seasons (as reported to the CDC), we find that the novel coronavirus killed between 9.5 and 44 times more people than seasonal flu.“

This is what happens when you compare estimates with actual counts. Things can get distorted pretty quickly.

Hopefully these numbers can clear up any misconceptions that are loaded into statements regarding flu apples and covid oranges.