Diabotical Is Out Tomorrow & It's the Arena Shooter We've Been Waiting For
This Kiwi game has gone global on Playstation
Gaming September 24, 2020
Share

Good VR games are rare, rarer still are decent introductory experiences to scrub VR users who are looking for a quick experience to get up and started with. Vetrix covers all those bases, and it’s only NZ$8 so you’ve got no excuse not to pick it up.

It’s dressed up like the original gameboy version of Tetris, but it’s additions to the formulae are enough to distinguish it away from clone status.

The last example of 3D tetris that is at all relevant was made way back in 1989 by the legendary original creator of Tetris Alexey Pajitnov. It was called Welltris, and it was the first sequel to what is essentially a perfect game, and well, it sucked. It really sucked. I hate it. It’s a top down view of the well, with the blocks you drop essentially blocking your view of what’s going on. For years the formulae has been to stick to what made the original concept great, and merely extruding the blocks a little for games like Tetris Effect, which admittedly is also a great VR experience. Fuck, yeah ok, I guess you need that in your VR library too if you don’t already.

Vetrix on the other hand has had the freedom to remove some of the key elements of Tetris to make a more suitable experience that uses the VR space to it’s full potential. The well is now two blocks deep, 8 high (?), and 10 across. blocks appear on a plate adjacent to the well that you then pick up and place into the well/playspace. There’s no gravity so you can literally place blocks anywhere, even in the very top corners. To destroy a row you have to fill that entire row as usual with the added challenge of that row now being two blocks deep. the rows above then move down one, as you’d expect. As you go along coins will appear in the rows that move into the playspace. These take up space and are essentially bonus blocks you get extra points for destroying. The coins are on a timer so you can miss out on their bonus score if you aren’t quick enough.

This leads to some situations where you have to decide whether you want to start building rows from the top, knowing full well that you could easily create garbage rows for yourself later on down the line when they eventually make their way to the bottom of the space. It’s very much high risk high reward. And so far it’s payed off for me well enough, last time I checked I was 3rd on the board for high score. These gigantic scoreboards are available to be seen at any time, as they loom over your arena on either side of you. One for each mode, Time Attack and High Score. 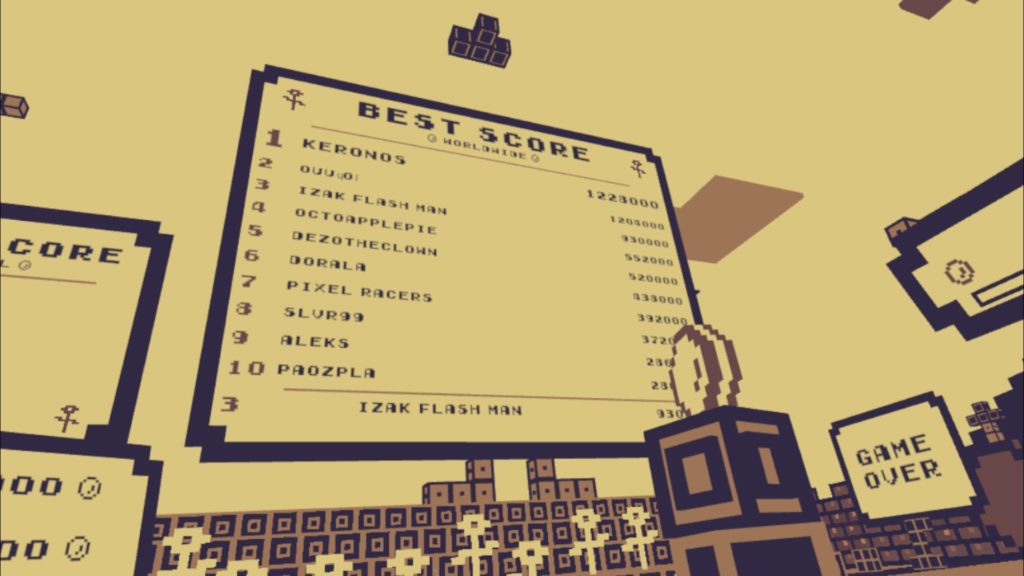 I usually end up double handling each block, grabbing with my left hand, rotating it enough for it to be in a comfortable position for me to make any more final rotations on the block with my right when I go to slap it in place. Everything in the world is adjustable, so you can grab the well and put it in front of you whether you’re sitting or standing, same goes for the spawn plate for the blocks. If you’re starting to get a messy well you can spin it around easily enough to see what’s going on around the back.

Blocks are all the standard fare, except no reverse versions of any of the blocks, because you can just automatically do that anyway when you flip them over. There are two new blocks though, a single mino which is super rare, but always a godsend for clearing out a garbage row that was beyond saving, and a new piece which would be impossible in the old game because it makes use of the Y dimension.

There are a bunch of different colour palettes you can switch the game between, meaning there should be something you find works for you. Personally I go for the brown saturated look, but there’s always the gameboy classic pea green if you want to really rock it old school.

I was able to get some complete newbies to VR playing it with no trouble at all, as well as some utterly drunk moderate VR users.

All in all, I totally recommend Vetrix. It adds new layers of strategy to a game I love, while also adding so many new elements and design choices it should really not be compared at all.