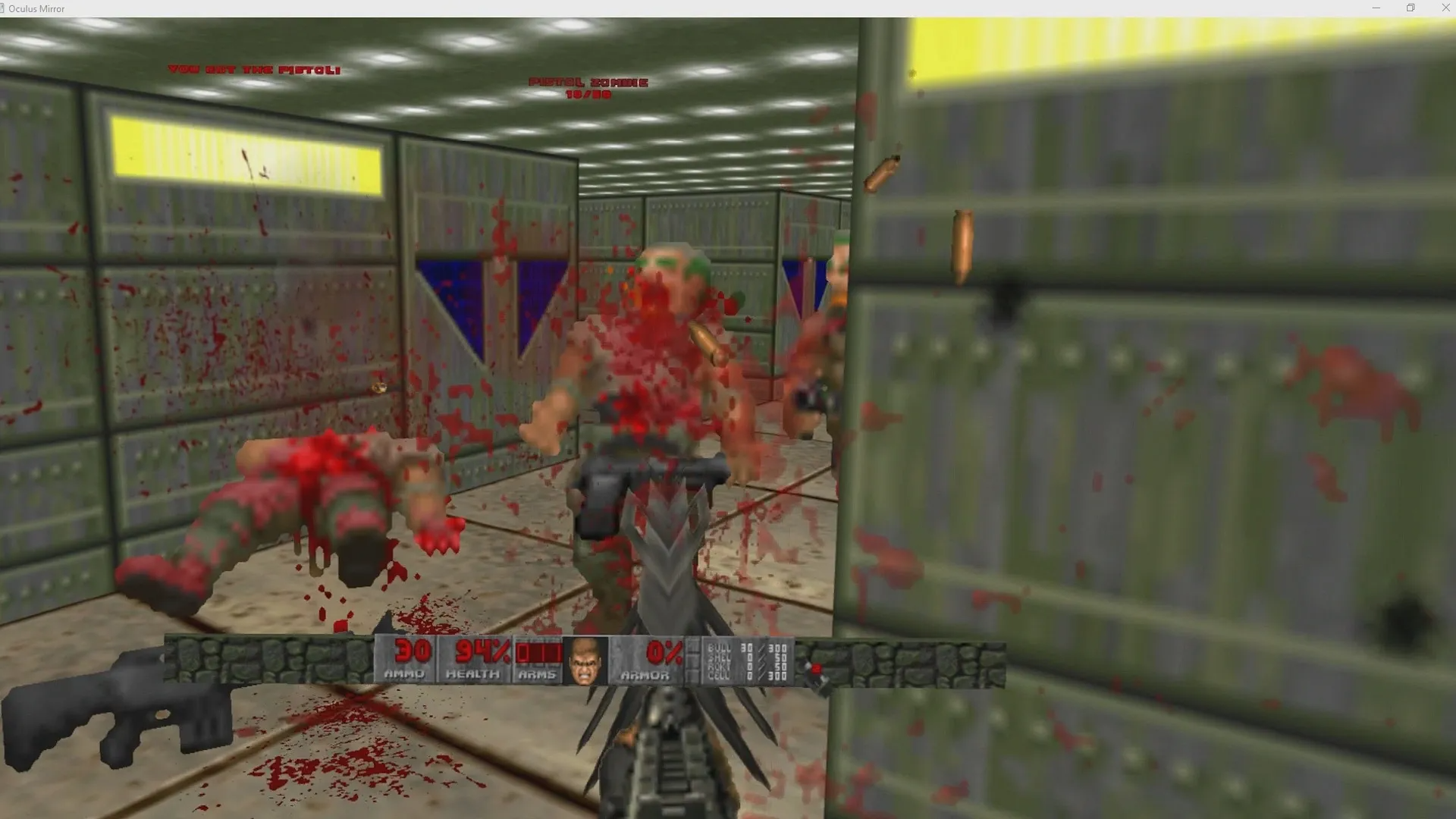 I was thirsty for more VR games after clocking Boneworks and Half Life: ALYX, unfortunately not many of the current Steam offerings are turning me on very much at the moment. This has taken me further afield to the weird indy space, which has always been my home away from home anyway.

The Doom community has put doom onto literally everything at this point, so it wasn’t super surprising to see there was a mod to get it working with my headset. What I wasn’t ready for though was what a refreshing and solid experience it ended up being. If you’ve played the original games at all recently you’ll be feeling the aging process on those gimpy controls. The original game was made at a time when owning a mouse wasn’t a given, so it’s set up for all hands on the keyboard. That’s absolutely mental for FPS sensibilities these days. Fortunately VR strips all that out and makes it feel like a brand new game again. You have head look, and can aim anywhere (rather than staring at a wall and automatically shooting an enemy above you), and honestly, the whole experience in VR was totally painless.

After getting fucked in the arse by a couple modern VR titles like OrbusVR and Vacation Simulator that were perfectly fine with my view being a couple meters from my play space it was nice just being able to just PLAY A GAME without having to dick with a dozen different settings and menus.

I played it seated the entire time and was able to clock the entire game in under a week (a session each night usually meant finishing an entire episode easily). By default the classic menu bar hangs at the bottom of your vision, acting as your HUD. You can tweak the size of it in settings but I left it at default, despite the text being far too tiny to read in the top left that alerts you when you pick up key cards etc. The base GZDoom mod I used has pretty ratshit 3D weapons, just using the sprites from the original game criss crossed over itself. With the right free mod online you can have some ridiculiously bad ass 3D weapons to hold onto that look completely out of place with the rest of the spritey textures. The enemies are also upscaled and have their pixely corners rounded and fuzzed, which as a pixel purist I didn’t super appreciate, but at the same time it had a softer effect on the eyes I guess. I’d still like to play a version where the sprites aren’t so smudged though.

There are a couple aspects about the game that aren’t entirely VR friendly, but not enough to make it a frustrating or unfun experience. It’s only little things like a white flash every time you walk over armour shards, or strobing in some of the darker sections of the game.

Overall I had a total blast with this VR mod, and would recommend it whole heartedly to anyone wanting to get more out of their VR headset for only a couple bucks. My title for this post really isn’t clickbait, it’s honestly the best way to play Doom 1 now in my humble opinion.

How To Set Doom up For VR

Setting up Doom for VR is surprisingly easy, as far as getting ancient games running in VR goes. Things you’ll need are the original Doom.Wad files which, if you’ve bought it via steam are easily found here:

Then you’ll need to download the latest build of GZdoom found here on github.

Finally you’re going to need a mod so you aren’t using ridiculious looking sprites as your weapons the entire time. You can find a good 3D weapon mod here. The models look totally out of place and I’d prefer weapons that look like they belong in the world similiar to the ones in Compound but beggers can’t be choosers.

Open up GZdoom.exe and make sure you have the doom.wad file copy pasted into the same folder. It should register that they’re there automatically? Open the .exe by dragging and dropping WeapVR.pk3 into it, this will load the weapon mod once you’re in the game.

And that should be it! Start it up and you should be good to go. I found with my WMR set up at least I needed to alt+tab just once after booting to make it “wake up” or whatever, it might be some sort of weird focusing issue, not sure.