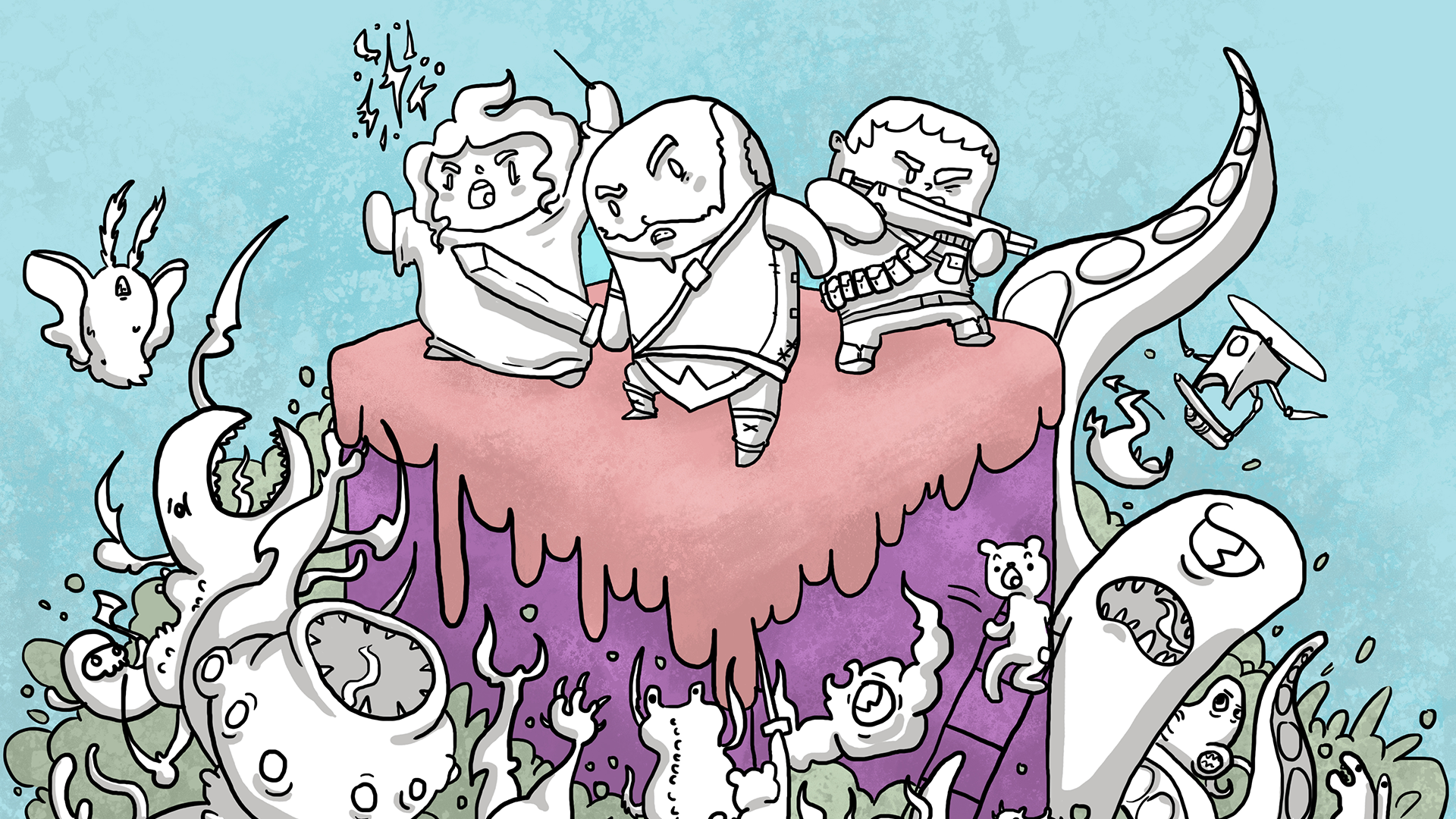 I’ve had a pet project on the back burner for a couple years now, and by that I mean most of a decade. Because at this age, anything that happened “just the other day” happened an entire lifetime ago.

It’s an RPG based on my Blobby World, a whimsical place where little cube people speak their minds and giant monsters try and eat them.

You can take a gander at the live docs I’m working on here:
Rules – Skills – Weapons

The RPG is as rules lite as I feel I can make it and is essentially DnD boiled aaaaall the way down. I wanted to strip everything down till a game can run as smoothly as an episode of HarmonQuest. That means combat in particular shouldn’t last more than a couple rounds. So I deal in very small numbers.

Players only have about 15hp and I don’t expect most monsters to have more than 5.

At the time of writing the weapons section is the most shabby, and I’m yet to add a Beastery so people have something to actually kill. To be honest I need to add this section so I can start balancing all the numbers out so things can run the way I want ’em to.

Other big departures from most RPGs is that there’s no leveling or XP. You can beef your character up though, at your DMs discretion, if you had a particularly awesome adventure for example. Also since you’re not trying to work your character to level 30 or whatever, this gives you the opportunity to actually give your character a story with an arc or conclusion.

Quick character generation was also key because I want people to be able to experiment with different builds. I figure that if you can make a new character on the fly it means DMs have more licence to kill them off and players won’t have a hard time saying goodbye to them.

There are only three Attributes, Strength, Dexterity, and Smarts. any one of these can stand in for charisma, cause sometimes people just want to fuck a really flexible smart person.
I wanted to avoid the word Intelligence or Wisdom because these have gotten way too much baggage over the years, plus ‘Smarts’ lets people know that this isn’t a totally serious game.

I’ve done a couple playtests, on one of my last ones combat was quite dry, with a lot of missing. To cure that figuring out whether you hit someone with your weapon is tied to your highest attribute score as long as you can justify it. Aka “I use my smarts to know where that guy is going to go, so I can make sure my sword is there first.”

Really I wanted people to be able to choose any attribute and not have it effect their combat effectiveness. Strength isn’t an obligatory option for people who wanna fight shit. There will be weapons and stuff that are affected by your ability scores though, and abilities still augment your skill challenge rolls outside of combat (roll strength to pick up your mum, you fail. it’s impossible.)

There are no classes. Instead during character gen you can pick from a massive pool of abilities, and yeah, some are pretty OP. Some abilities are augmented further by attributes, giving you a reason to dump attribute points in one category more than another.

In one more big effort to avoid pitfalls of bean counting and maths I talk about distances in steps. This is to avoid having to capitulate to both Imperial and metric users, and also hopefully make imagining the action in peoples minds much easier. I don’t visualise the word “meter” or “5 feet” into much, but I have a fair estimation of what a big step looks like.

Over the next couple weeks I’m going to be drawing and publishing monsters here on the blog with a short excerpt that will help give people ideas for adventures to run.

If you got any feedback at all let me know or leave comments on the Google docs. It’ll help me make a less sucky game.