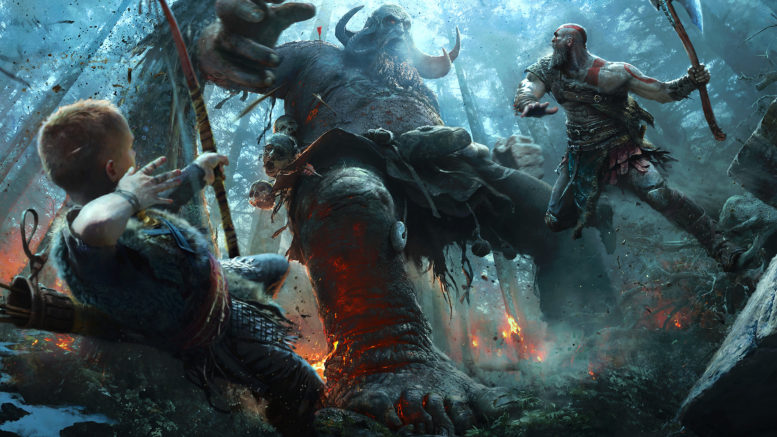 Disclaimer: I haven’t finished the game yet. Not for a lack of trying, though. God of War’s 2018 soft reboot is probably one of the longest games I’ve played since The Witcher 3, and, to be honest, that’s super refreshing.

GoW has been away since 2013’s ‘Ascension’ title (not including remasters and bundles), which has given Santa Monica Studios five years to build the first new entry to the series for the Playstation 4. That time has clearly been well spent, as you can see in the video below, which shows early footage of the game.

Graphically, this game is a stunner. I suppose that’s something everyone has come to expect now, what with DICE and all. GoW delivers a beautifully immersive experience that’s buoyed by the lack of loading screens – the ‘Single Shot Effect’ – and smooth framerates. I’m playing on the bog-standard PS4 so it’s 1080p running at what looks like 60fps for most of the time.

The reworked combat system isn’t as brutally hack ‘n slash as how I remember the PS2-era games as being, but that doesn’t stop it being mighty satisfying. There’s more of an RPG element now, with various upgrades for the Leviathan axe or your armor available to spend your hard-slaughtered gold on. Oh, and you have a son.

Atreus himself is a bit of an encyclopedia, full of knowledge of the Norse gods and surroundings. Early in the game he mentions not having been sick in a while, probably his [SPOILERS] demigod abilities showing. Remember Kratos is a god himself. Atreus also uses a bow and arrow which comes in handy when you’re getting rolled by a million enemies at once.

Probably the only criticism I can muster is the text. Mother of God, why is it a thing for game developers to choose the smallest font possible? My TV is fairly large, about 45 inches or so, but it’s not exactly niche-large, and I have to get within about two feet to be able to read anything. I get you don’t want words cluttering up the HUD and ruining the immersion, but don’t bother with words at all if the gamer can’t read them. It’s just annoying, and a little amateur.

Anyway. The Norse world in GoW is huge. Like, properly huge. I’ve played for maybe ten hours so far, and I saw something saying “Completion: 12%”. I’ve been chomping through the storyline mainly, with a little bit of exploration on the side, but it looks like I’ve got a long way to go.

God of War, then, is a little bit like an intro to Dark Souls. It’s not as insanely HARD as DS, nor does it have the breadth of character customisation, but it’s not as easy as other similar fantasy RPGs. In between The Witcher and DS, I suppose. It’s a damn good game, is what it is. Go out and play it right now. Then get behind me in the queue to buy God of War 3 Remastered.

Nile Is IZScomic's resident console review guy. He works across a range of NZ media with credits in M2 magazine and Stuff.co.nz Media Contact: [email protected]