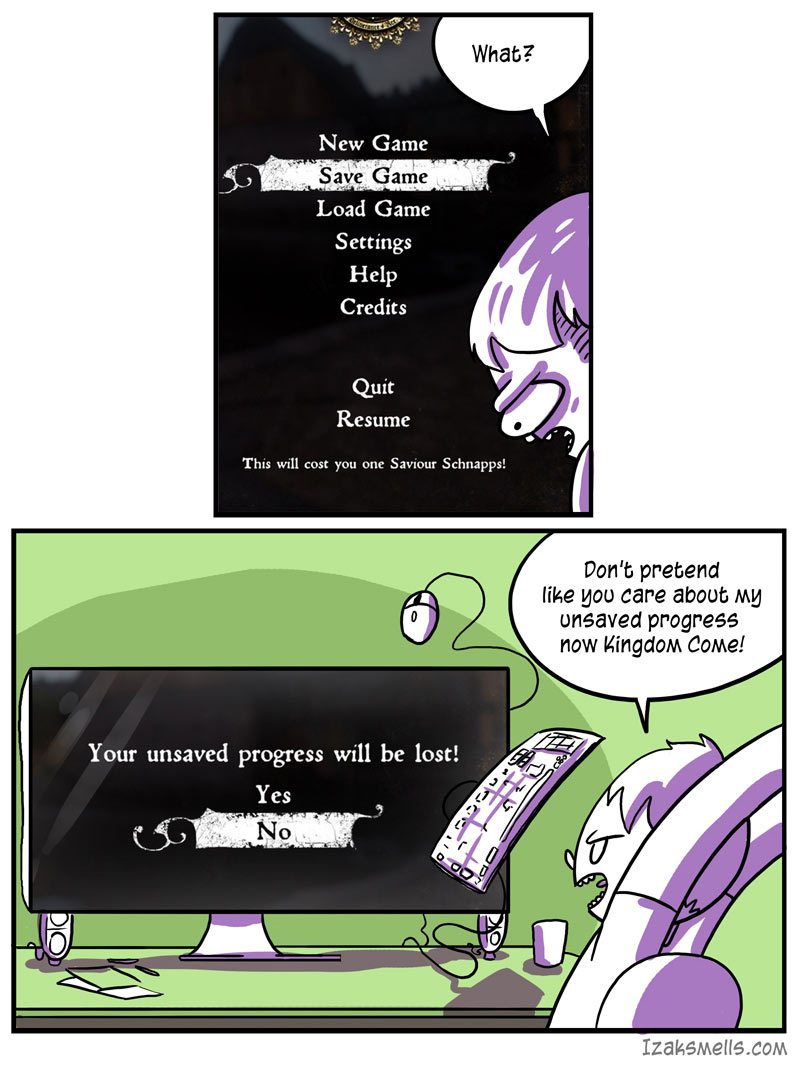 Edit: Since I first drew this comic the devs introduced a save and quit feature, which is a great compromise.

I’ve been binging Kingdom Come: Deliverance this weekend and I’ve been loving it. It’s come at just the right time for me. I’ve been wanting to get into Elder Scrolls again, but the mechanics of it haven’t been getting me very jazzed. Also the stories are a bit eh. Fortunately Kingdom Come has come to Deliverance me.

For some reason people have been comparing it to the Witcher, which is a bit weird. I mean I guess they’re both very heavy on the RPG side of things. I’ve found the story of KC far more engaging than The Witcher so far. Although to be honest, all I remember about The Witcher was that he seemed to be couch surfing from one hot bitch to another. In The Witcher’s favour though I will say that its game world was far more lush with things to do. I guess that’s the bonus about having a world infested with monsters and shit.

The easiest nitpick about KC is the save system. You autosave after mission milestones, at beds and taverns, and finally with the aid of Saviour Schnapps, which lets you save any old time (except combat). This is a limited use item that you have to buy from shop keepers or brew yourself. When you quaff it you also get a bit tipsy, which makes you stumble around when you talk to people, but makes you a bit better at smooth talking them due to your lowered inhibitions.

It hasn’t been a major stumbling block for me, but it has made me feel like I need to give the game so much more than I would with something like Skyrim. I don’t feel like I can dip in and out for five minutes, not least because sometimes loading an interaction with someone sometimes takes a minute of loading screen.

It’s an amazing game though. It’s perhaps the best peasant simulator ever.