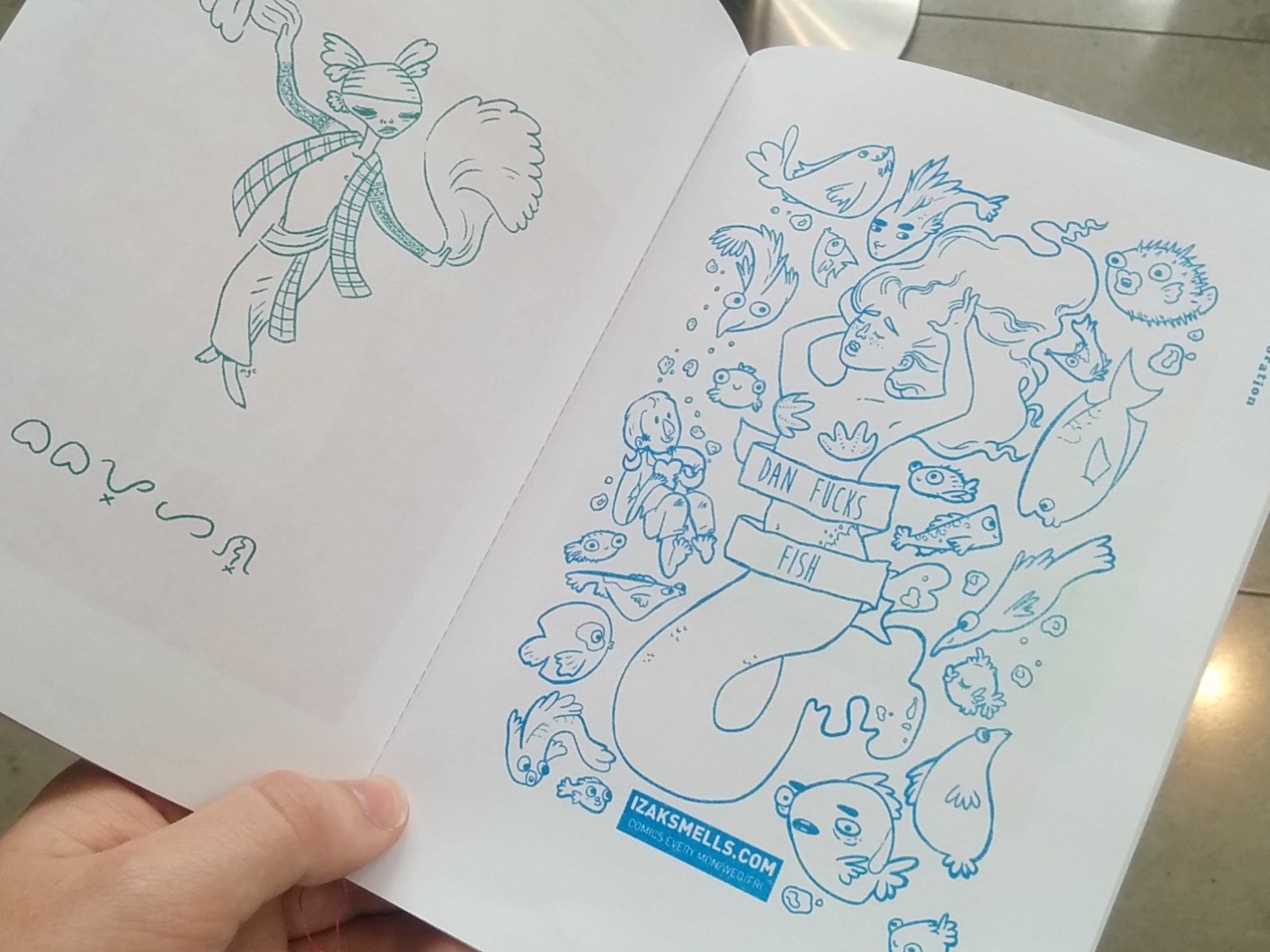 So yesterday was Auckland Zinefest. We did a terrible job of telling you all because quite frankly I had no idea what was happening most of the time. We didn’t have our own table, instead being grouped on the community table, which was actually a lot of fun as we got to share the space with a nice collection of folks.

Becky and I got to the Auckland Art Gallery a bit early, along with a couple others. The lady at the door said we could come in but we’d have to come through their back entrance. I’d normally jump at the chance at going through a rear entrance, but this was a bit weird.

This is what happens when you get to @akzinefest early. You go to the dungeons. pic.twitter.com/4wxCBgHGgI

We got buzzed through two doors and then just ended up at the front doors the lady had opened to tell us to come through the back entrance. So at least it helped kill a few minutes I guess.

What was cool to see was Becky’s illustration of Dan Fucks Fish (which is based on this comic here) in the Collab Zine. This is a modified version of the poster print. Maybe if we ask nicely becky will share it here.

Kristof did most of the standing from 10 till 4pm, it was pretty brutal on the ol’ limbs. The amount of people coming through were awesome as well, it was pretty much packed the entire time.

They loom. They wait pic.twitter.com/TG7vblHnNT

I wanted to get a badge that said “feminist” and the conversation eventually devolved into whether I wanted to buy old nazi flags, which I wouldn’t mind. I mean, if it’s an actual vintage flag that’s a big deal! Not a genuine replica made in China bullshit. Becky got pretty upset about this and reasoned that I can’t have Nazi merch because there are still white supremacists. Once again white supremacists ruin all my fun.

If you had the opportunity, would you totally buy an old Nazi flag?

Exclusive behind the scenes look behind our table at @akzinefest pic.twitter.com/ymOT4wQhBK

It was cramped in there, but was glad to be cramped with these cool fellows. (My book is on the left.) https://t.co/KJ8Dho1sD7

Liam was on our table with us and was mint company, he does reviews for Flicks, so check them out. It was also his first zinefest! He had a pretty thick comic out about two kids discussing death for the first time. He used that pitch on a lady and she bought it immediately. The book is based on a script for an animation which never made it to completion. We recommend it, if it’s ever at another zinefest I recommend hunting him down! Oh snap you can totally buy it here.

The Izaksmells merch cat! We had a great time today at Auckland Zinefest. The colab zine was beautiful @akzinefest pic.twitter.com/sbKGjiXOCF

Our cat provided nothing, but still somehow managed to make an appearance just for hanging out near our stuff.