In Japanese he’s known simply as Carrot Man, but in the West he’s a god among carrots. This is the story of the World Carrotweight Champion.

The World Carrotweight Champion is an unassuming level 4 Yu-Gi-Oh! card with 1900 attack and 0 defence. He’s an effect monster with the handy ability to be special summoned from the graveyard with the sacrifice of other plant-type monsters. 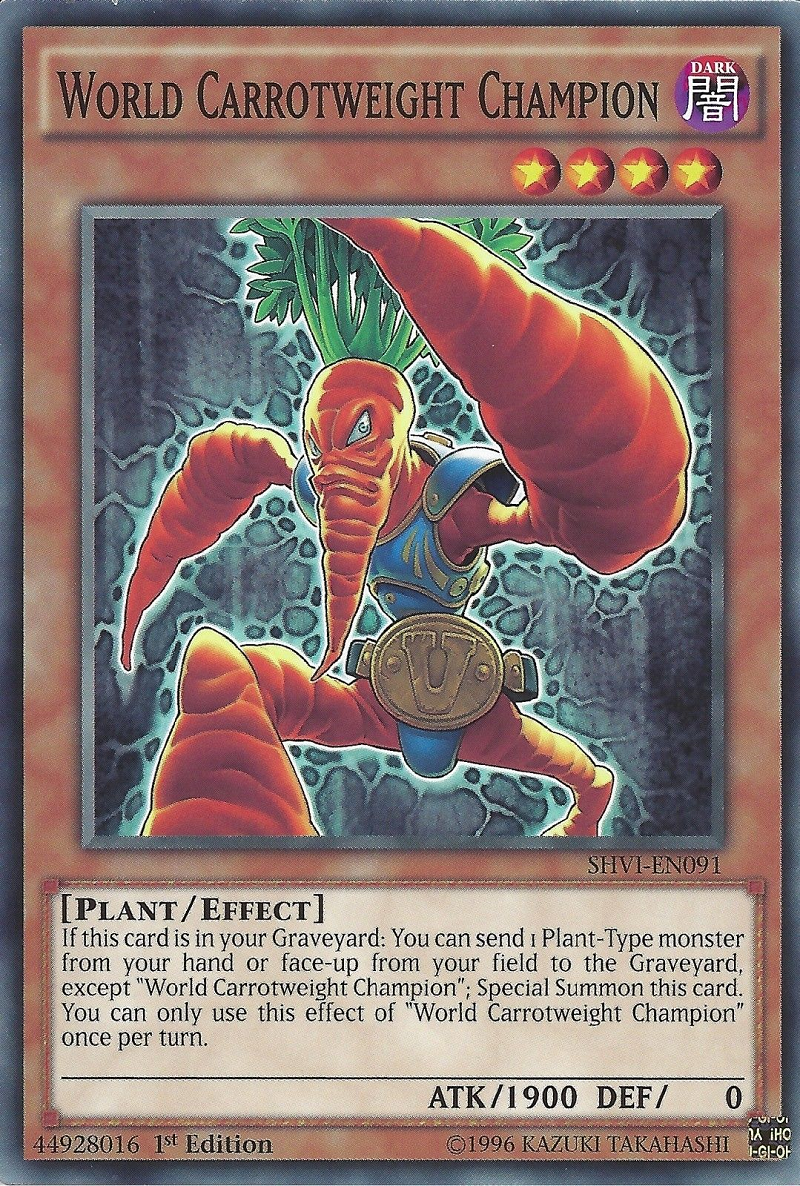 I’m not expert on the current (2016) meta of Yu-Gi-Oh, but I can only assume that he’s used literally nowhere.

Carrotweight Champion’s existence is entirely a joke. He was birthed into a cruel world where he exists to be laughed at, despite his exceptional attack. The card’s Japanese name, にん人 ninjin, is a pun on 人参 ninjin (carrot) and 人 jin (human). Both are pronounced identically, according to the cards trivia page.
How much is a “Carrotweight”

A carrotweight is a rather open ended unit of measurement. All carrots are “carrotweight”.

However let’s assume that our Champion is the heaviest of all carrots. The heaviest carrot ever recorded was 9.07kg. The World Carrotweight Champion appears to be made out of roughly 6 carrots. So at a push we could say he weighs 54kg (119.05lbs for plebs).
The World

Of course we never specify which world he’s the champion of. At the moment he’s an unlimited card found in the Shining Victories booster packs that came out in May 2016.

He exists in one of the 12 dimensions of monsters that exist alongside the human realm. At the moment the Anime can give us very little detail about carrots and their weights but hopefully upcoming seasons will finally answer these burning questions.

What we do know is that the dimension he exists in has developed a society of carrots that rivals that of human infrastructure and ability. They’ve learnt the fine art of metallurgy and armour crafting, as well as valuing war. Also sexuality is presumably on par with that of humans, as the place where his carrot dick would be is demurely covered. This is only a theory though, and the covering could just be a handy spot to do a strap so the armour doesn’t come off when they’re wrestling.
Conclusion

If the Carrotweight Champion of the world were to enter the human realm and battle it out with the best we had to offer we’d probably be ok, as he’d only qualify as a flyweight contender. flyweight divisions typically have an upper limit of 56.7kg, of which the Carrotweight makes it into easily.

An earlier version improperly noted Carrotweight as being a “rank 4” this is wrong. It’s “Level 4”. Thanks to u/Alto_

Because I don’t know Japanese it turned out my wikia reference was entirely wrong (and so was the wikia entry.) This has since been amended by u/likeagrapefruit.

0 Thoughts on The Dangers of The Carrotweight Champion