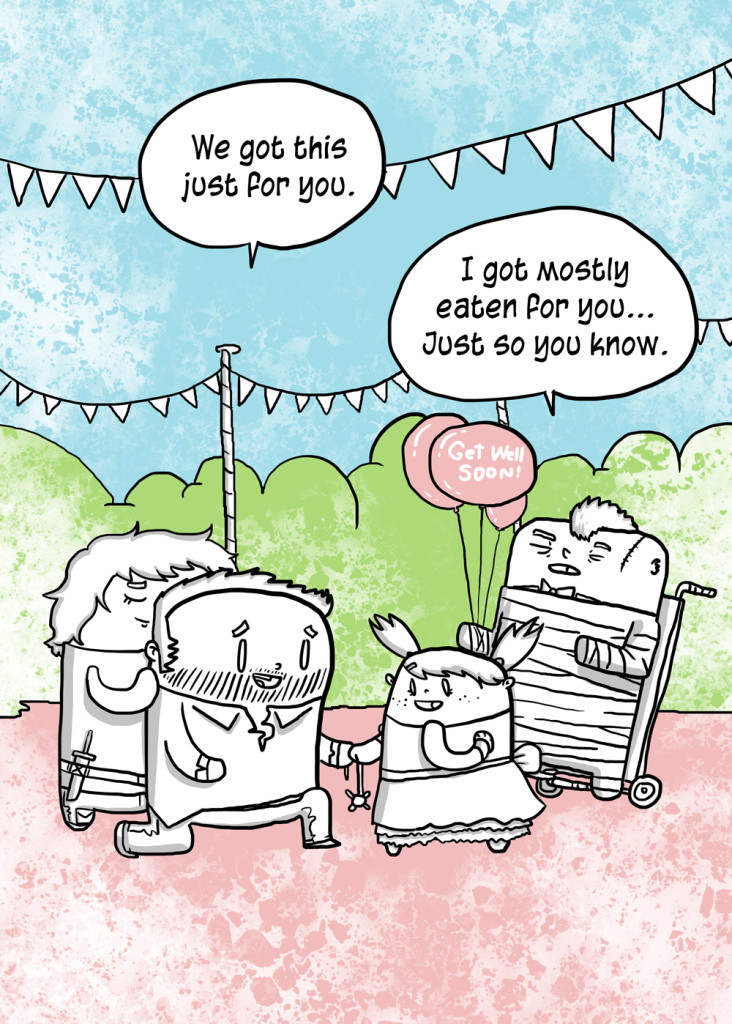 The weekend was intensely busy. I put some washing on during Saturday morning and didn’t manage to pull it out again until Sunday evening. That’s how I define business now. One day I’ll measure it by how often I miss out feeding my kids.

The second annual chromacon took up Saturday, and it was awesome. We had an embarrassing start though. After dodging needing to have a conversation with a young anime nerd (she’ll grow out of it hopefully. It’s a phase.) We were trying out a giant Cintiq. It took Becky ages to get used to not in any small part to the fact they weren’t running Photoshop. We asked the person if we could put a different program on and she tried telling us something about a colouring competition or a discount if we wrote our names down. No thanks. People came over and asked her more about the hardware. Suddenly we realised that all the branding on the stall was for Artrage, the program we had been bagging the whole time. Not a single piece of Wacom branding anywhere. WHY HAD WE NOT NOTICED?

We extricated ourselves from the situation and went downstairs to where the main hub was. I kind of prefered it upstairs where it was in 2013.
I randomly got talking to this guy about his notebooks he had strewn on his table. 5 or 6 moleskins lying there stuffed with doodles.

I sat there wigging out over how rad they were and asked the guy why he didn’t have any prints or anything for sale. He said he got payed all day to draw anyway so he didn’t need to bother with that sort of thing. We got talking and it turns out he’s the art Director at thatgamecompany. I’m talking to the guy who designed the journey character! Hot damn!
“The character is based off a paper cup folded up.” he explained. I asked him how intentional the ambiguity of the character was and he said “Totally. We wanted people to be able to project themselves onto the character.” and then went onto talking about how they simplified down the look of the character to help with the material renderings and stuff.
He showed him my 8bit version of the journier and told him that’s about as close as I’ll ever get to being as cool as him. He looked at it for a second puzzled “yep, that’s my character.” I probably should have explained to him that I drew it.

I saw Benjamin Zhang Bin there as well. He was a huge inspiration for me when I first started getting into digital art with my tablet. Pity I couldn’t tell him, he couldn’t really do english and had handlers and fans all over the place. But he’s done an original bit of art in Becky and I’s Chroma book. If I said anything to him I would have come across as a tosser anyway.