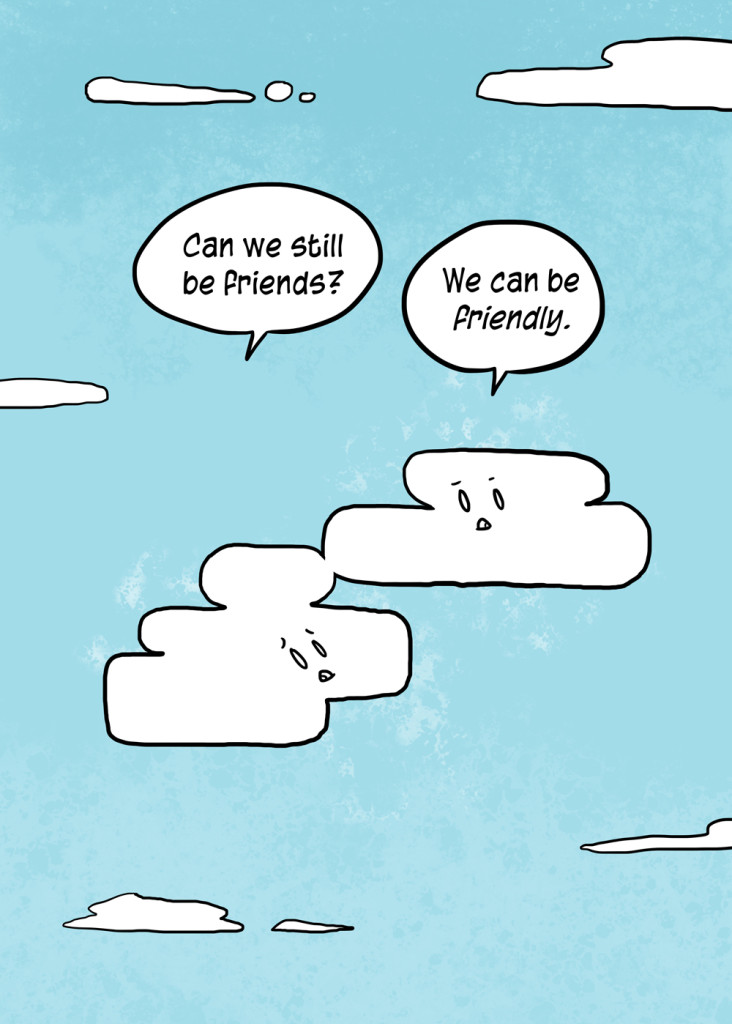 This conversation was originally sketched to take place with the Skully/Boofy hair couple but it made me way too sad. People who don’t draw won’t understand why this cloud set is so hard to draw, isn’t that right people who can draw *Wink*. Tell them how hard it is *Nudge*.

I’m about to go off and watch the old Judge Dredd movie for kicks, so part of me doesn’t want to write this story, but the other half of me knows I probably won’t get a good chance if I don’t do it now. So, without further ado…

It was Sunday, much like any other. We needed to duck into the Henderson mall quickly to pick something up. We parked outside the front doors and around the corner a little bit from the building. Jumped out of the car we were greeted by the usual menagerie of human detritus.
Becky and I walked past two particular Maori boys sitting on some seats chatting away to each other. As we passed on of them started making the “come hither gruff & snarl” at Becky’s butt. We both looked over angrily and Becky shot back with a “fuck off.” they laughed and carried on. I didn’t do anything, just seethed inside.
We weren’t in the mall long, so inevitably we had to walk past them again. Once again they waited for us to both get past before starting the gruff ‘n snarl. I. Stopped. Becky kept going to the car. I protruded my butt out a little, rubbed my supple flank in an exaggerated fashion and looked at him with bug eyes. In a small husky voice I said “Hey baby… If you think I’m sexy, you can just say it to my face.”
The one making the sounds looked at my almost startled and then looked away angrily. I continued to rub my butt, my arm being the only thing that moved on my entire body. His friend craned his head over, saw what I was doing and then let out a “…Ha!” and began to laugh to himself. The first one didn’t look again.
I got in the car, once again restoring my maidens honour. I felt just like a knight would.