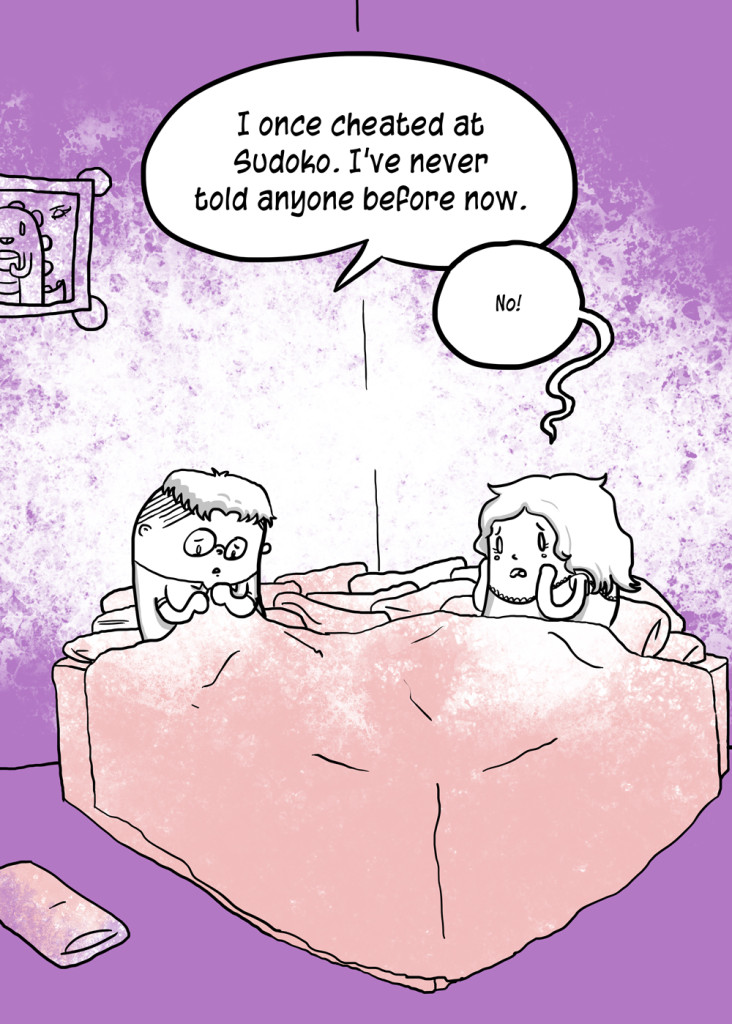 I’d like to thank +Kristof Haines for helping with this one. I messed with the lines somewhat though. I always feel self conscious when mucking around with the work of people that I perceive of as “real writers”. So here’s the original script:
“What’s your darkest secret?”

“I cheated on sudoku once. I’ve never told anyone that…”
If you’re here for the comic you can feel free to stop reading now. Here, I’ll even leave you some obligatory chillwave so you feel like you’ve reached the end of a regular post. I really recommend it, it’d make a great piece beside some Postal Service.


is probably the title most clickbait sites would use if they ever get wind of this non-story. Here, let me explain. So there’s a petition that’s sprung up out of nowhere claiming that DICE has had Sarkeesian pushed onto them by EA to do whatever she says on the new Mirror’s Edge game. You see I’m a hardcore fan & I have Google alerts for whenever someone mentions ME2.
Here’s the petition here. Don’t sign it just yet!
Note that the petition provides no links or references. However they do mention that “she went so far as to say that women needed a whole new “simplified” control set for this game, based on her personal experiences, passing them off as the opinion of the female gaming community.”
The reporter who originally posted about it was horrified by the statements made by Sarkeesian, and so was I. But they seem conveniently inflammatory don’t they?
As an aside, I don’t want any games journalists getting near any game. Imagine if that dick from IGN went and slashed Alien: Isolation in half for the lols.
Ok, so going from the quoted text and shitty photoshop image at the top of the post from actiontrip.com we can trace these peoples thoughts back to this Destructoid article from 2012. Let us note again that the only reference or citation is at the very end noting that the writer has been “reliably informed that there are Tweets relating to this on the Femenist frequency Twitter account” which he apparently couldn’t be bothered following up or linking to. Show me a smoking gun bro then your 1000 word wordcount won’t go to waste.
Ok, since he did zero legwork, we will, skip to 6:15 and watch for about a minute.


Here’s the archived post and screenshot that’s been circulating (which was used in the above video.)

Edit: On the way home on the bus today I realised that these rumours cropped up long before ME2 was even officially announced back in June 2013. So for EA to have announced prior to that time that she was “officially working on the game” would be ludicrous to assume.

In Conclusion, No She Doesn’t

So the old Destructoid post was acting upon information that was given birth to on 4Chan.
Being “reliably informed” is something you can become if you go to /b/. Unfortunately finding out that you have a kink for big hairy feet is about all you’re going to be informed of.
So she did do a talk, but nowhere has it been stated that she works there.
Let’s have a look at what you would look like if you hadn’t done some research:

The really sad thing is that all these fans that are going on about this are damaging future sales. Alpha Omega Sin’s memory is long and he’ll be voting with his wallet in 2015/2016. EA will feel the full wrath of his money going into Battlefield 5, SO THERE. Take that! How does that make you feel EA? Do you feel the burn?
I love the Mirror’s Edge community and it’s just stink to see them taken for a ride like this.
If it’s any consolation, the petition people already have their wish.

Also if you somehow find a credit somewhere or a DICE employee actually saying that she’s working on the game and not just doing a presentation I’m fully willing to eat my words. Alpha Omega will help me I’m sure.

I’d like to thank +Matthew Rust for doing the legwork for me on this one. I had one of those days where I had to “work” or whatever.

Edit 19/12/14: EA responded concluding that “This petition is based on inaccurate information. EA is not working with Anita Sarkeesian on development of Mirror’s Edge.”