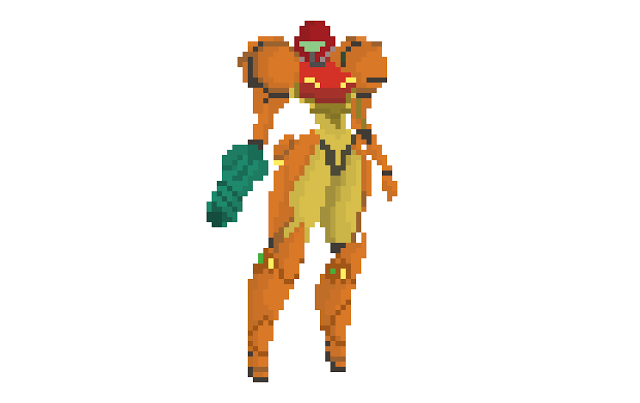 You can now get this as a print!
So I’m undertaking a pretty large project. It seemed like a natural progression of what I’ve been doing anyway. But basically I want to draw an 8bit version of every notable video game heroine out there. I’ve already done all the Tekken girls, and recently did Hannah from BF4. I feel a little funny about doing pixel versions of characters that are already pixelated, but I figure if I adapt them to my style then it shouldn’t feel like I’m covering old ground to much. Also, I’m putting this out there, the original mega man looks super gumby and I’m over all the remixes people are doing of him. Although if they’re using it as just a jumping off point that’s totally fine. I started out by ripping off Swords and Sworcery after all. Unfortunatly one pixel wide legs just don’t do it for me.
I’m now moving on to Metroid! Do you guys remember back in the day when Samus wasn’t a fetish toy and just an androgynous robot that can roll up into a ball. I intentionally avoided doing her out of her suit. We have enough scantily clad woman in the future line up, and besides, her suit is super challenging to draw and why pass up a chance like that!
If you have a request on who I should draw next drop a comment!