So I was building an adventure for my group, they were setting off to meet the Raven Queen and ask her a couple questions. I keep most of my mythology and locations canon (although that hasn’t stopped me from being flexible), so my players get the real D&D experience. I’ve been running our campaign in the Nentir Vale, which I’m totally in love with as an adventure location. Simple but classy history in a well rounded cosy locale that I could plug anything into and my players could mess shit up to their hearts content.
Anyway, I was researching the Raven Queen. So there are no shrines to the Raven Queen in Fallcrest. And the only place I could find her in relation to anyone on the normal planes of existence is in one small sentence along with Avandra and Ioun in what’s simply called “Temple of the Fates”.
I couldn’t find any mention of it in the online magazines either, maybe it is there and I missed it.
So in lieu of that I decided to create the temple myself.
Location: Anywhere you need it to be in your campaign.
State: I dropped it into a forest, and has been overrun by foliage long ago. It has a tall facade but quickly drops away into the ground. deeper into the forest a spire can be seen poking out over the canopy of the trees. If the players check out the spire there is no way in and it has no doors.
The Entrance: The players go down the stairs and enter a large foyer. in front of them is three doors. Each with a carving of each of the gods that are worshiped there above the door frame, Avandra, Ioun & The Raven Queen. DC11 Religion check to jog the players memories for who each symbol belongs for. Maybe make it a bit harder for the Raven Queen and perhaps Avandra’s is an auto success, her icon is everywhere it seems.

In elvish carved below each of the symbols is a quick mantra of each god.
Avandra “Delight in Freedom. Luck favours the bold. Take your fate in your own Hands.”
Ioun “Seek the perfection of your mind by bringing reason, perception, and emotion into balance with one another.”
Raven Queen “Hold no pity for those who Suffer and die, for death is the natural end of life.”

Each room leads to a trial of the respective god, and each mantra gives a clue into what sort of trial they shall be facing. Neither of my players knew elvish and they left their lacky at a nearby village, so they missed out on this tidbit.
Avandra’s Trial: This room is set up with traps and is really a place for the more dexterious party members to shine. 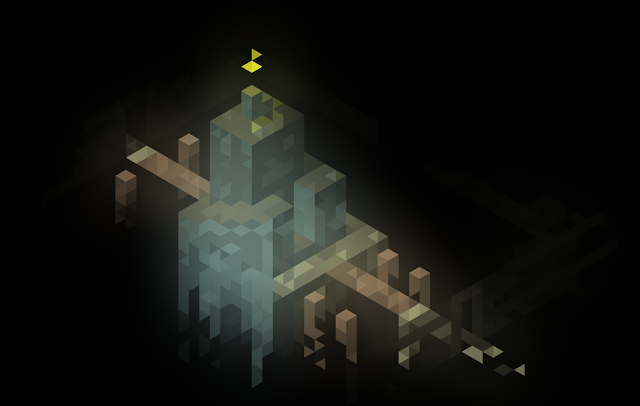 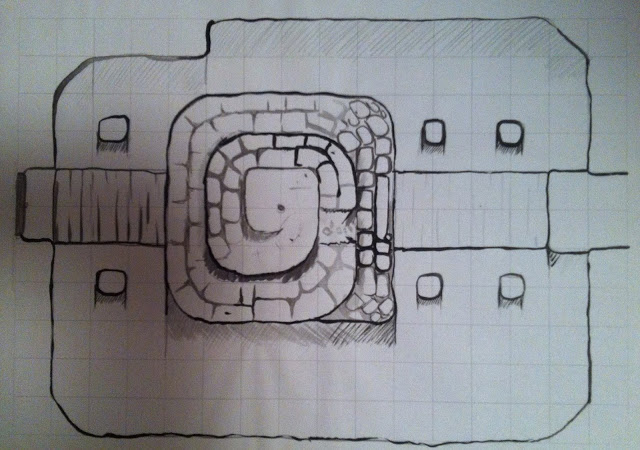 I got two views of the map for you to make up for my horrible iphone photo. If I had an A3 printer this wouldn’t be a problem.
The players arrive from the right hand side and see a tall spire, one segment of which has collapsed. At the top of the spire is a floating glowing key. Obviously for the door on the other side. this spire sites in the center of a pit which drops down out of sight, not due to depth, but rather mist that’s floating around. A wooden bridge leads over to the spire. On either sides of the bridge are poles or old columns which go up to the same height as the bridge. Standing on the two tiles directly in front of the bridge on the spire island makes the bridge fall down. In the even of this the players stranded will be forced to do some pretty accurate jumping across the pillars to get across.
If the players are attentive enough they’l notice a ladder going down into the mist on the northern edge of the spire.
As they round the spire, on the southern edge is another tile trap. If a player sets it off the wall in the spire shunts out into that single tile, pushing them into the mist.
If they avoid this then there is a crumbled gap on the eastern edge. Falling results in some fall damage and forces them to go around again.
After these challenges it’s a clear run up to the floating key. Once grabbed it’s light dims and gravity kicks in again for the key. Leaving it pretty plain and ordinary. It unlocks the door on the far western side of the room.

Falling into the mist 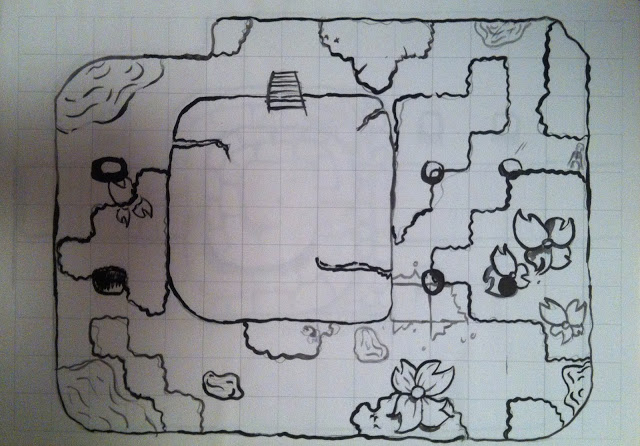 Through the mist is a leaking aspect of the feywild. It’s pretty much a tropical paradise. Large flowers are blooming and everywhere there is lush foliage and springs of water oozing out the walls. If a player is lucky enough they could land in a bush and cut down on some fall damage.
I populated this area with two twig Blight Swarm. (p.109 Threats to the Nentir Vale)
But feel free to stick whatever exotic beasties are appropriate for this location. It can be assumed they slipped through accidentally from the Feywild or summoned by Avandra so adventurers get to appreciate being free and living another day.

Ioun’s Challenge
Ioun is all about logic and stuff, so this room was really for the sorts of players who like solving puzzles and riddles. 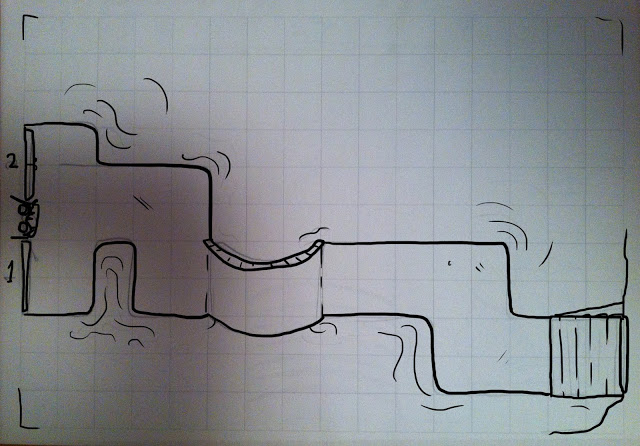 The room is predominantly murky green water, stagnant with age. The sort of water that has gross stuff at the bottom which touches your feet. Entering from the eastern side of the map the players decend a short flight of stairs to a concrete path which is only a few inches above water level. The water is calm with no ripples or disturbances from the air on it. a small bridge allows the water to enter the bottom southern half of the map, or maybe the other way round, who knows which way water want’s to go.
On the western side of the map is a weird ass statue flanked by two doors.

They appear to be two guards, bearing the sign of Ioun. Without moving their voices’s emanate out to the adventurers. “One tells truths, the other lies, pick the door of fortune and continue. Pick the door of death… And die. You may ask one of us one question.”
This is that classic logic riddle. Hopefully you haven’t already blown it in one of your adventures already.
Chances are your players have heard it already, but I was working on the assumption that having a room full of consequences would make them sweat about it and actually think twice about the whole thing.
The question to ask is of course “If I wanna get out, which room would the OTHER one tell me to go in?” if the right door is door 1, the Lier would lie and say “The other guy would say door 2 for sure.” and the truth sayer would say “The other guy will tell you to go through door 2.” so either way, go through the OTHER door.
I stocked door two with a black dragon (Monster Vault p.68) which would do really well in the water.
Also feel free to fill the water with ghastly stuff if you’re trying to string the encounters out a bit longer.

The Raven Queens Challenge
This challenge is the most freeform and harrowing on you as a GM. I don’t have a map for this one since it wouldn’t be very interesting.
Upon entering the room the players can see the door out directly in front of them in a clear line across what appears to be a large cavernous room. The door one the opposite side is lit up, but apart from that it is dark. To the players left and right is darkness and you can’t be certain whether there is a wall let alone an end to the room. As the players step out into the room images flicker up on either side of them.
On the left hand side they see moments of death that they regret, but could have stopped and were able to.
On the Right they see the same scene, moments before the unfortunate incidents. They notice that the only thing missing from the scenes are themselves.
If they step over to the left they stand amongst the mirages, but nothing changes. If they move over to the right the scenes become more solid and eventually the players appear in these moments of time and are able to attempt an encounter or whatever to save the persons life.
This assumes that your players have had these moments, mine sure have, so I had a bunch of key encounters already primed and ready to go assuming my players went for it.

Doing an encounter and saving a life brings them back to the darkened room. It is up to you whether the life has been saved. But it should be noted that the Raven Queen has dominion over death, and not the dead.
Doing one of these encounters fails the challenge of the Raven Queen as the players aren’t respecting fate and are in fact reversing a death. Pretty much everything the Raven Queen isn’t into.
Passing the challenge is as easy as walking to other side of the room and continuing forth.

The Spire
After the players have completed one or all of these challenges they are led up a spiral stone staircase that has three shrines and effigies of the gods at the top. The room is rounded and a few windows look out over the trees. From here they can conduct their business with the god of their choice.

Hope this has come in handy. If you liked that painted piece you should go check out its creator, Becky. She’d totally do commissions for your games and adventures if you wanted.

12 Thoughts on D&D: Temple of the Fates