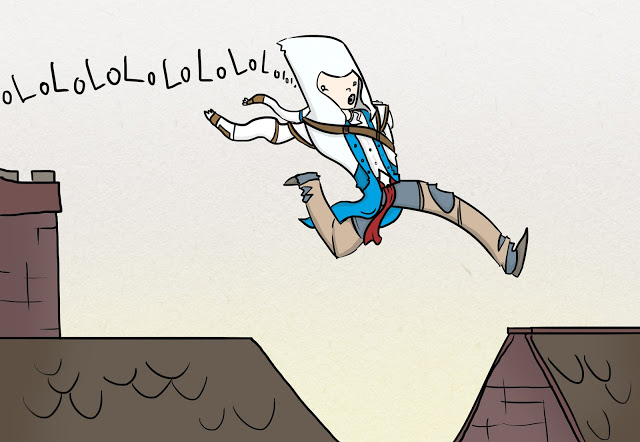 I’ve recently played through Assassins Creed 2. I ran the game into the ground in a state of extreme procrastination. I collected every chest of gold and did every side assassination and beat up. There really needs to be more race missions. Those were good. And less crypt missions, those things sucked so hard.
Unwittingly my finishing of the game comes just in time for Ass Creed 3, which I probably won’t be playing on my PC for at least 3 years, so I can get it for 20 bucks out of a budget bin or something. The above image however demonstrates what I imagine the gameplay to be like, which is consequently what the gameplay is like on all of the previous games.
Half way through playing the game I had a thought that most of you probably had. “Wouldn’t it be badass to jump in the Animus and run around as your ancestors. But I quickly realized it would suck. Since the chances of having a total bad ass assassin ancestor is extremely improbable. You’d desynchronize every time you did anything other than slowly starve to death or stop washing dishes.
Even worse your ancestor could be one of the courtesans, but at least you could find out who the father was. I guess. But even WORSE than the courtesans would be the retards from Creed 1 which push you around. It go a long way to explaining things about why your family is so messed up though.

I also went and did something stupid and uploaded a video to youtube in which I “review” or at least “enhance” the gameplay of True Skate, a game that’s recently come out on the iOS and is actually quite fun. I think it’s worth the dollar. Although I was disappointed that there’s only one skatepark. But there’s a decent amount of challenges to complete and tricks to learn.