What The Deuce?
Alt-J - An Awesome Wave
Uncategorised September 22, 2012
Share

Previous – First – Next
If you were wondering what Matt (writer) sounds like when he’s drunk, the Med-Bot is exactly it.
Isn’t it weird having an entire episode without any red or purple in it? I designed Med-Bot a while ago. In fact you can see him (or a bot like him) floating around in episode 13. Points to anyone who noticed that. I’ve also included the original concept art I emailed to Matt when we first discussed the Med-bot.  As you can see I changed his little wire flapper things into usable appendages. I also decided that making his eye look like a speaker would probably be too confusing.
A group of us went to Overload today. It’s an anime/comics convention thing. I’d never been to something that was so anime oriented before. I left with so many questions. There’s an entire subgroup of people who are willing to pay for Naruto fan fiction.
I think under normal circumstances you wouldn’t find us in that setting, no matter how much the word “comics” is stressed. With that said, the atmosphere wasn’t as overwhelming as Armageddon, and would probably make for a good toe dipper into the world of hawking your wares. It’s an interesting position we’re in. Like we’re shopping for the future comic convention that will be privy to a bound version of Snow. 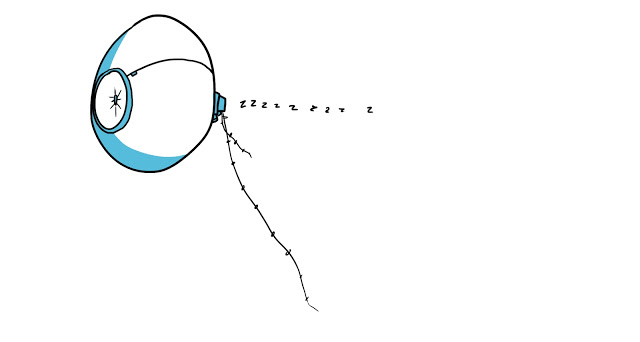 Edited 25/9/12: Thanks Kathleen for pointing out that the little bot miraculously had all his legs in the second panel.