While everyone else was wigging out about how the iPhone 5 wasn’t how they imagined it in their wet dreams I was busy playing Bastion, a game that debuted this time two years ago on the PC and pretty much everything else. It came out on the iPad on the 29th of August, the same time as The World Ends With You. It’s out for about 6 bucks. TWEWY on the other hand is out for 24 bones. Square Enix, bro, stop charging such a butt ton for your games. If a quality game like Bastion, which is a port, the same as TWEWY, can be at such a decent price then you have no excuses. Same goes for Final Fantasy 3. I’d snaffle both those games up in an instant if they were 6 bucks. 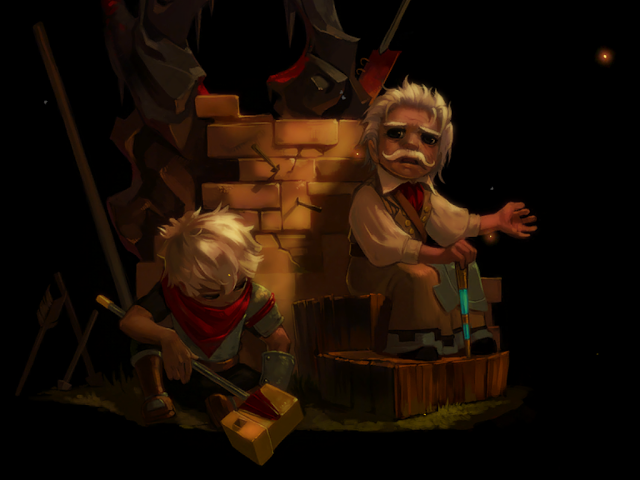 Anyway, since I’ve already clocked TWEWY twice on the DS, I decided Bastion would be the purchase of the day. It’s a great game, and leaves nothing out from the original PC/XBLA version. Cheaper as well, although you don’t get the soundtrack bundled with it, which is totally worth it. Because the music in Bastion is superb, and you’re definitely gonna want to come back to listen to it again.
This game really showcases how crap a monospeaker can really be. Take their advice, wear them headphones.

That’s probably the biggest downfall of the game. If you aren’t listening to that gravelly voice telling you the story as you play, then you’re really missing half the experience. I found myself putting the game off until I had some decent time to myself before playing it. Definitely not your light snack food mobile game.

The controls are decent and intuitive. You can switch between two modes, I stuck with classic mode, so a hand on each side, one controlling directions, the other messing with blocking/rolling/attacking/special abilities. The other mode just felt weird, you press on the screen where you want your dude to go, and he’ll happily skip off into the abyss in an attempt to go in a straight line to destination B.
It auto aims for you with some weapons, and it usually targets the right thing. Occasionally I got frustrated when I started shooting minor threats miles away when larger threats were industriously chewin’ ma goolies. To be honest, I preferred the auto aim hiccups opposed to having to do the aiming myself because that would have been horrible. Geometry Wars: Touch all over again.

These problems turned out to not be a big deal in the end, and weren’t game breakers for me.
The art is amazing, you should totally go get inspired by all of Jen Zee’s art. It’s amazing. Her loose digital painty style she occasionally employs reminds me of David Hellman’s stuff.