The party assembled again on Saturday. I, as the faithful DM took no time in introducing Greek the Rogue & Puddle the Wizard to commander Traxe, the aformentioned commander of the crappy little defensive force of Winterhaven. Winterhaven is a fairly small town nestled in the western reaches of the Nentir Vale, two days travel from Fallcrest.

Traxe expressed his gratitude for the adventurers thwarting the attempted heist on a trade wagon the previous night.As they were talking, the trade wagon rolled into town, unscathed by bandits. Although one of the four dwarven guards did mention a kobold attack. He showed it too the wizard, who figured out it was an amulet of allegiance to some demon. Greek recognized that “some demon” was in fact Orcus, a name they have heard thrown around a lot recently.

Thrown around about as often as they throw around the decapitated head of that same demon. Only when nobody is looking though. The demon head felt heavy in Puddle’s bag as they stared at the amulet, realising someone was after the severed head they possessed, and they wanted it bad.

Traxe grimaced. If it wasn’t their own townsfolk plotting to destroy trade caravans it was those annoying Kobolds. He pleaded with the adventurers to go destroy the kobold encampment. “Alright, where is it then?”
“… I don’t know. Just wander around till they attack you.” This guy was obviously a master of strategy. He did however offer to release one of the elves from the night before, so the adventurers could be lead by a guide who knew his way around the Gardbury Downs.
Greek flatly refused. Puddle didn’t mind; if there was one thing he hated more than an elf it was wandering around aimlessly in the wilds.

As they headed out of town they suddenly realized they were walking right into the lair of a group of baddies who wanted the skull. They took stock of what they had. The Skull is encased inside a box, which seems to block the evil seeping out of the skull. It has a lock on the side, but no key. They don’t know anyone they can trust, and if they bury it “The DM will just say it’s gone when we come back, that’s the sort of thing he does.” 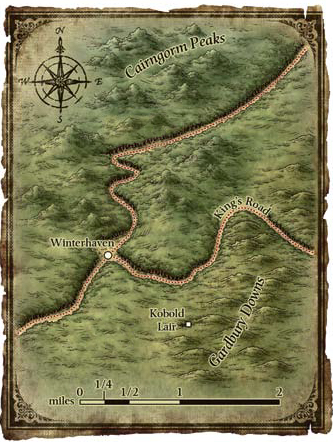 A startling display of metagaming took place. I don’t recall a single time I’ve made my NPCs omnipotent, but whatever, I digress.
They decided to take it with them, since if they died, it wouldn’t matter what happened to the world, it would be for other adventurers to handle.
And besides, if a bunch of Kobolds killed them, then they weren’t worthy enough to carry around a demon skull anyway.

Turns out they could cut right through the scrawny bastards. Halfway through the process they leveled up to level 4. Woo. I think I was more excited than they were. I envisioned conversations in which I proudly told other DMs that “MY players are level 4, what level are YOUR players?” of course this conversation is probably going to stay imaginary. Hardly anyone plays D&D in NZ.

They faced off against Irontooth, a Goblin, who acted as the leader of the Kobolds. At first he was joined by a spectral apparition of a man. This disappeared as soon as it was hit by a magic missile. Irontooth went down without a scratch on the adventurers. A kobold slinger did however manage to hit Puddle once, almost bloodying him. As Irontooth went down he screached out “For Orcus and Kalarel!”

Since the adventurers respect the dead they decided to relieve the fallen goblin of his valuables. On his person(goblin?) was a note. It was orders instructing him to watch out for Greek and Puddle. It also mentioned the death of Maloreth. The last main bad guy they had slaughtered unceremoniously. Seriously, my bad guys have bones of glass or something.

Whoever gave Irontooth that note really wants the skull. Probably wants to complete his collection or something. Goblins are like the trademe/craigslist of the fantasy world.
“Oh before you slay me, do you know anyone who want to be Balins flatmate? Cheap rates, Crystal Ball TV. Absolutely no fatties please. Argh, I am slain. For Balin!! *ceases to live*”

*Note, Balin payed extra for the rights of the goblins dieing breath speech.

0 Thoughts on DnD After Action Report