Currently I have wasted 40 hours of my life playing a free to play MMO called APB: Reloaded. You can get it for free on steam and is about 5gigs of downloading.
I got it on a whim, because I saw the art for it ages ago and thought it was rad. What it is summed down to is grown up cops and robbers. You can be goodies or baddies. Baddies can mug people, ram shop fronts and steal stuff. Goodies can… Just stop them from doing that really. That and returning stolen cars. So the good guys can get tasers for stunning an enemy and arresting them. So far I just shoot them dead, it seems to be a more efficient way of dealing with the problem.

You get a huge open city to run/climb/drive around that’s populated by AI civilians and 99 other real people, split evenly into cops/bad guys.
If you’re ready you can get call outs to stop crimes/protect things/raid houses bunch of other stuff. You can be in the middle of doing a solo mission when suddenly a team of bad guys will be sent out against you, prompting you to call for backup if you need it.

A whole bunch of these Instances can be going all at the same time. So it’s not uncommon to drive past a mall or an intersection with a firefight going on in the middle of it. If you’re not part of their Instance you can’t be harmed. But you can still nick off with their vehicles. Impeding peoples travel is the most effective way to troll others and I always get a good giggle out of knocking someones car rolling down the road.
Customization is intense. It’s the first MMO I’ve played where your character/graffiti/car actually looks distinctive and different from everyone else.
You do missions for NPCs who level up and unlock new equipment for you, so that keeps me coming back the most. I’m one of those people that needs some sort of goal. And in APB it’s actually an attainable one for a change. 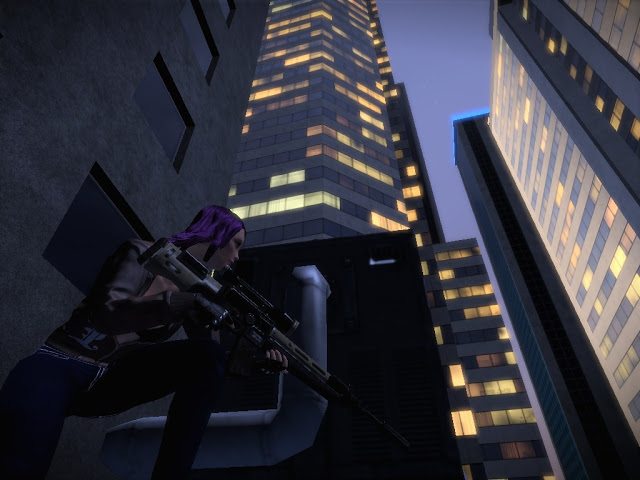 It’s a great game if your a corridor shotguny type person and also a fantastic game if your a sniper who likes finding hidden spots way up high.
Every mission feels fresh just because the action never occurs in exactly the same place twice. Most shooters bore me after a while when I notice I run around the same acre of map shooting the same little soldier man over and over again, but after 40 hours of playing I haven’t once thought “Oh this bit of city again *sad face*”.

Well that’s my sales pitch, so I guess I’ll just go to why this game could suck.
Cons: When my character first generated she looked exactly like Olivia Wilde, I wasn’t sure if it was random or everyones character was Olivia. So I changed it. Now I kinda wish I hadn’t.

Fighting people comes up with no lag (not that I have noticed) but driving has about a half second lag. Although after playing for half an hour you don’t notice it anymore because you gain the ability to swerve for things well in advance.

The first 10 minutes of game time when you first start up are the most crazy confusing moments I’ve ever had with an MMO. I woke up in a police department, started reading how to play, randomly entered an Instance without doing anything, got shot by a crim who had the balls to come into the depot then respawned, stole a car and figured out how to play the old fashioned way. Who needs words!

Cars aren’t set to arcade mode, so don’t expect to recover from a crash very quickly.
When everyones leaning out the windows of the car to shoot at an enemy it becomes extremely easy to friendly fire all your team mates point blank in the back of the head.
There are people with shotguns.
If you get this game expecting it to have a storyline, a single player mode, or anything that doesn’t involve teamwork and shooting people with briefcases then you will be gravely disappointed.
You get your arse kicked a decent amount of the time. But the times your not are glorious.
Watching civilians give a sickening thud and ragdolling all over the road after you hit them with an ambulance gives you a scarily satisfying feeling, making you call into question how humane you really are. 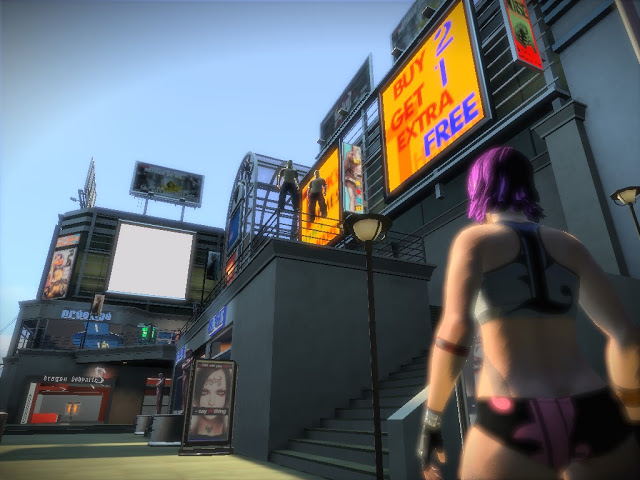 Is it worth the 5 gigs? Personally I think so, if you’re in the mood for some action. And it’s free as well. So how can you go wrong? My in game name is Finess and I’m probably not wearing much. It makes the pang of death more bearable when I get to watch my sexy ragdolling body flop around.