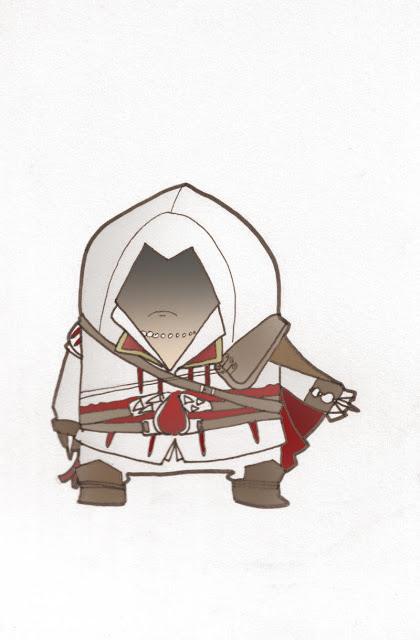 I went for the starter gear from Assassins Creed 2 for this one. Ezio has a lot of outfits 0_0. What a nancy boy. When he isn’t prancing around on roof tops he’s trying on the latest 15th century Italian fashions.
Ok Riddle me this. Everyone is pretty much expecting the last game in the Assassins creed series to be set in modern times. The Descendent whatever his name is, is slowly absorbing all the experience from his ancestors, and will one day run around kicking ass. You get to do a little bit of this. But what happens when everyone expects to go into a modern day metropolise to jump around in? He takes ten minutes to clamber up the side of a glass building with misplaced sticky outy bricks in it, to eventually get to the top, grab a flag and then eagle jump off the side of the building, 20 stories into a handy hay bail or rubbish bin or something?