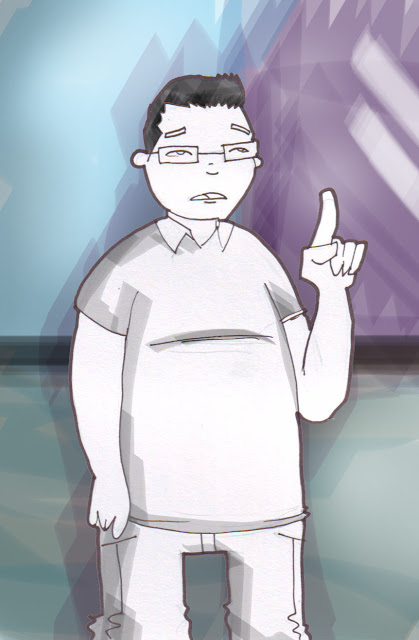 Portrait of one of the dudes during our final presentations. He’s always been fun to draw. It’s the rollypolly-ness of him that does it.

Ok, so on to the referendum stuff. If you’re in NZ, sometime over the next little while you’re gonna get a letter that asks you what sort of voting system you think we should employ (or stick with). You can read about it here, or instead let me give you the abridged version here:

MMP (Mixed Member Proportional):
What we have now. Voters get two votes, one is spent on the party you like, and the next is spent on the dude in your local area that would best represent you. This system generally needs parties to team up before they can rule. This allows smaller parties to throw their weight around.
Down Sides: Randoms can get in that no one voted for (with the mighty power of the party vote.)

FPP (First Past the Post):
I’m pretty sure this is the old system NZ used to run on. We get one vote, and we spend that on the person in our local area who we think is rad. These people get in and that’s pretty much it. There doesn’t normally need to be any buddying up in these circumstances.
Down Sides: Minor parties may never get any say in anything.

PV (preferential Vote):
This system is used in parts of Australia. Voters rank who they would like to get in to parliament. If their first choice candidate doesn’t get in their vote is used on the next one down the list. No votes get wasted. This is also fantastic for people who have favourites.
Down Sides: Parts of Australia use this system. If you have no friggin clue who anyone is then you are presented with a list of “blah” which you’l randomly slam numbers beside just to pretend you know what you’re doing.

STV (Single Transferable Vote):
The other part of Australia uses this system. Much like PV, voters rank who they want to get in, or they can just pick the list of people that their preferred party wants in.
Down Sides: Can’t really tell the difference between this and PV. You figure it out.

SM (Supplementary Member):
Similiar to MMP, two votes, party vote and a local bro vote. 90 seats are for the local bros, and 30 are for the party vote. That 30 is split proportionally to the amount of votes each party gets. A party can usually rock solo without the help of any other parties.
Down Sides: You will still be voting for politicians to rule over you.

If I got these summaries totally wrong please tell me, I don’t want to throw anyone off. If you think you’ve picked your favourite system I would recommend reading up a little more about it first.