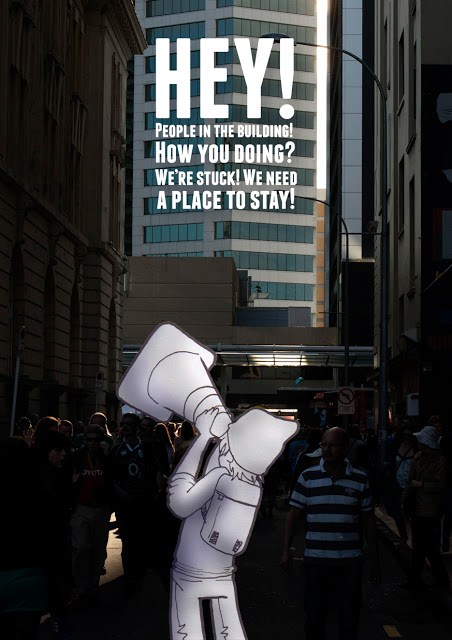 Me, her, and him decided that we would brave the Rugby World Cup opening ceremonies (here on out known as the RWC). Let’s make it clear, I thought it was a bad idea, but was game anyway, because to be honest, when are you ever gonna see that many people in NZ? Becky was keen to go and was the main advocate of our trip, because once again, when are you ever gonna see so many people plus fireworks? Matt really didn’t like the idea of coming because of the aforementioned people, but since he really had nothing better to do and no decent excuse, he came along and took on the roll of photographer.
We decided to take public transport because that seemed to be the done thing. We took the train (and anyone who’s read anything about the WRC in the herald or on the news knows where this is going already). We got on at Henderson, and by that point it was already standing room only. Fortunatly it was a free ride, so we got to use transport money for Burger Fuel later. There was a pair of girls who kept shouting “Go All Blacks!” “Screw All Blacks!” I’m sure if they were a bit uglier someone would have punched them. Britomart was stacked with people and they did a good job of ferrying us out.
I’ll probably get into the guts of what else happened during the opening ceremonies in town another time, what this post is for though is to talk about the transport situation. We watched the fireworks up by the rose gardens in Parnell and it was fantastic. We then waited for the crowds to disappear before we made our way back to Britomart. There were massive ques for the trains, stretching right out of the building. We stood in line for about fourty minutes, moving a few metres during that time. Fortunately we had the entertainment in the form of everyone around us. In particular a drunk lady who was stoked that her kids had payed for all her drinks and she had managed to give them the slip. She was a wiley one, and managed to talk herself through the crowd. Wouldn’t do her much good however, since eventually a conductor came along and shouted to the crowd that the bus had stopped and wasn’t going anywhere, and that people had been pressing the emergency stop button. I read later on that the train had already been stopped for some time and people had started to press the buttons because some kids started fainting from heat exhaustion.
Anyway, we were informed that there were replacement buses coming to pick us up. So the huge crowd suddenly turned into a huge school of fish (like you see cycloning on those documentaries) flurrying for the pick up location. four buses came and went. One was stopped in the middle of the road, cutting across all lanes because it hadn’t finished its turn, due to all the people pressed up against it desperate to get on. We watched this all happened and realized that we were totally screwed. There was no way we were getting on those buses. After the four buses had left there were still masses of people waiting to get out of there. Across the road and up about 15 stories were people on their verandas watching the hustle and bustle. I tried getting their attention a few times by waving at them, before I finally picked up a traffic cone and yelled at them.
To cut this massive story short, Matts folks came to the rescue and drove into town and grabbed us. The Motorways were super quiet. Matt celebrated life by going to Mc Donalds and having a mean 1a.m. feed. Me and Becky crashed.