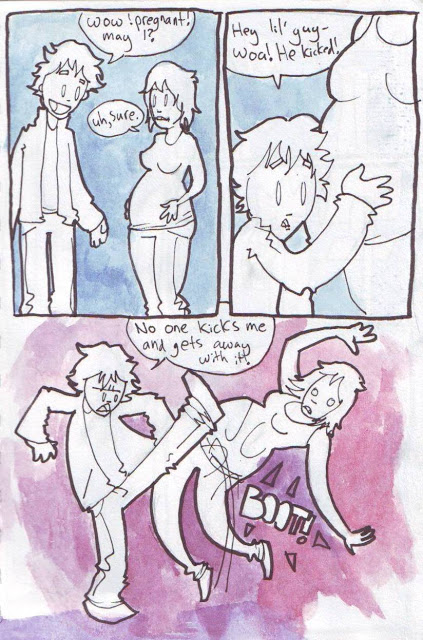 I was told not to do this one, but it was said during a lot of laughter, so I took it as a “You shouldn’t, but you really should.”
The internet always likes a little Cyanide & Happiness humour anyway.
I know I’m about a month to late to comment on this piece of current affairs: Alasdair Thompson and his sexist comments about women. He had the gall to say that some women have “sick problems” once a month. Wtf man, how can you be so callous. Soon your gonna be saying that some women feed smaller people with their breasts. Or maybe your gonna start saying women have feminine facial features. Rein it in bro, no one likes a truth spreader.
Its strange that people are jumping on him about this. It seems to me that he wasn’t using it as an excuse to pay women less, rather an explanation as to why. We should probably be thanking him for bringing it to the publics attention really. If there are pay gaps between men and women doing the same job then that’s something to be seriously looking into.
There’s a bill being put up by the Green Party that will allow women to have access to information about pay rates in their workplace to test if there is gender-based discrimination. I’m assuming this is generalized information about pay rates, since knowing individual pay rates of people could be disastrous. It’s a bit like having someones health records. It’s fine for the doctor and you, but you don’t want everyone else knowing you have a funky STD, incontinence, and an erectile dysfunction. I mean, people probably know about the incontinence already, but explaining how you got the STD when you have problems getting it up would be a real pain in the ass to explain.

0 Thoughts on He Kicked