A Supportive "Colleague"
Put some clothes on!
Uncategorised April 8, 2011
Share 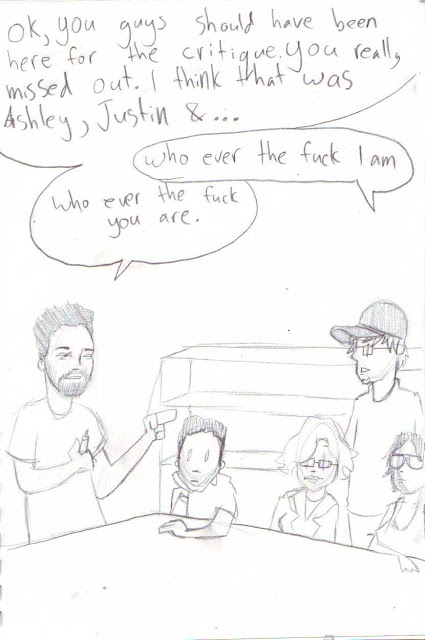 You understand the extent of your unattendance when being used as an example of unattendance your lecturer forgets only YOUR name.
I’m surprised at the extent in which my lecturers are getting into my doodles. Turns out they say some solid gold material sometimes. Phil has cropped up before, earning himself a quote on the wall to inspire all us aspiring designers.

Yellowcard – Afraid
Amber Pacific – Always You
Mute Math – Reset
Yellowcard makes its way to the top of the charts this week. Wtf is this shit, I thought I called it top of the non pops. Afraid is a song that really got me in 09. I blasted it far to much.
Amber Pacific is much like Yellowcard except without the violin. So it’s just straight up punk. Their latest album features a new singer. So I’m not sure if it’s even Amber Pacific anymore you know?
Mute Math describes its self as alt rock I ‘spose. Some of the things they do just blow my mind. Perhaps the only band I would want the live dvd and album for. Reset features on their first CD, and is one of the few instrumental tracks. I recommend listening to them with a decent surround sound system. Note in the video how often the drummer gets shown in comparison to the lead guitar. Oh yeah, things really hit the fan at about the 4 minute mark. Such a wicked way to end a show.

0 Thoughts on Whoever you are