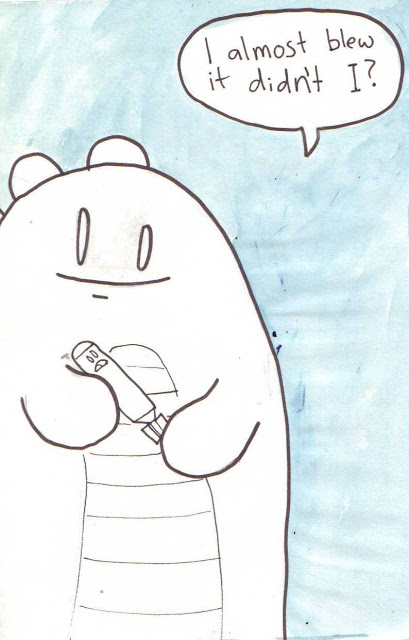 This is a reference to one of the final pages to my Broken Rainbow series. Ever since finishing the collection, I have been wondering if I will (or should) revisit the rainbow world. They sneak into my doodles every now and again, but this and yesterdays are what I think of as direct “sequels” to the Broken Rainbow.
Appreciate that link, how often does a blog, NOT ONLY link you in house (and not off to some grotty pay per click pyramid scheme,) but ALSO get you to the exact point on the page that they want you to look at! Yeah, It took me like 5 minutes to figure out how to do that. But it’s totally rad. Html skills +1
In response to Kiyo’s brutal comment in relation to this next section, I have retitled it

This time last week I posed my opinion that we haven’t moved out of post modernity into post post modernity yet (here on out we’ll call it post*2 modernity). I haven’t had any lectures yet, so I may as well do some self directed stuff. So the formula that Raymond Williams brings up says that there are emerging subcultures rising up in front of the dominant mainstream culture. Their either alternative, or oppositional. So there is the alternative lifestyle, that isn’t going to rock the boat and is happy to do its own thing in the hope that no one will bother them in return. So vegetarians could fall in this category (as long as we ignore the ones who released the rage virus on us all.) Pressure on the alternative subculture can turn them to being oppositional, the second group.
Oppositional could be thought of as the group that is really wanting to shake things up. They aren’t happy with the way things are going down, and are coming along to change the dominant for the better (or the worse).
Usually these subcultures bloom in response against the mainstream, a bit like how kids do the opposite of what their parents did. Hopefully this balances out when those kids have kids, and all of a sudden its hip to do what their grandparents did. Like crochet, and hiring hot air hostesses again.
Post modernity can be characterized by its use of irony and pastiche. So now we have entered a time of post irony, where things that were thought of as being cool because they were uncool are now just uncool again.

2 Thoughts on Almost Blew It