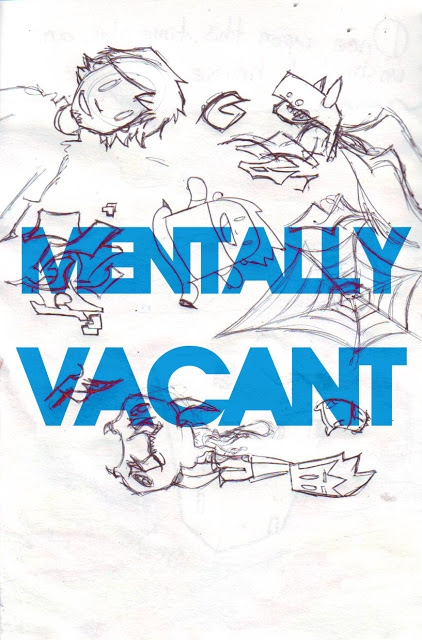 I spent tonight at the fortnightly poker game Keir & Matt have set up. I would say I played it, but that would be a lie. I went all in on the first hand and managed to loose against Keirs trip nines and queen. I had trip nines and shit all apparently. I remembered at nine that I should do my doodle. Although the absence of my watercolours dissuaded me from doing a Broken Rainbow one. Instead I doodled for a little while, not thinking of much, then totally forgetting about it. Next thing I know and it’s 2am and today had come and gone.
It’s very strange talking as though your still in the day somethings written, realizing half way through that your going to have to talk about the day your pretending to be in ending.

I was told this segment often featured at least two songs by the same artist, and thats just lame. Well, this has a lot to do with my listening habits. I enjoy listening through albums, getting the full sweep of emotion and experience the musician is trying to impart. So to remedy this situation I have switched from single songs to entire albums.
Jami Sieber is some chick from somewhere. She was raised learning classical music, and in her adult years has incorporated those early lessons to her own unique little breed of music.
Gamers will probably recognize her stuff from the kick ass game Braid. This is where I discovered her. The music is as amazing as the game. To be honest they both build upon each other. They compliment each other.
Its good background stuff, except when she starts making words come out of her mouth (Typical women). Her lyrics also creep me out a little. It’s very new age. Tree of Love is a great example of what I mean.
Overall good for background stuff while you write or draw, not so much if you want to headbang with all your little friends. Do people still do that? Or has all the old metal heads told their kids to not ruin their necks?