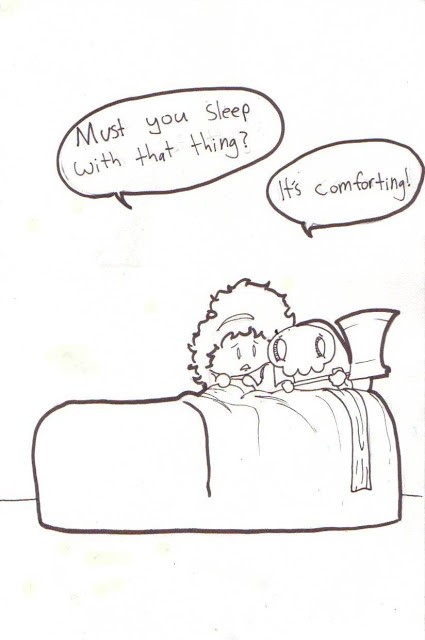 I don’t have a lot to say about this one because I didn’t think about it very hard. I do want to see the skully axe guys around a bit more. They sort of got forgotten about after the first couple pages of Broken Rainbow.
Oh yeah, While I remember, check out Harry’s post, it features super awful doodles by me.

It seems the problem with defining our time period is that we are restricting ourselves with to many rules. After reading an article “After Postmodernism” it feels as though we’re still using postmodern ideas to help define our supposedly new era. We can’t even use language it seems, since it changes meanings. There are no neutralities, since we’re all objective. We’ll always come at things from our own slant. From culture to culture, the article recognizes that, but it sees the slant as a bad thing. Or at least unscientific.
I was always under the assumption that the slant was what defines our era. For without the slant there is no flavour. Just ones and zeros. Oh, wait, there is no right or wrong from our jumping off point. So maybe just 2’s. Take that binary and logic!
So perhaps the only way to really understand where we are now is to be totally honest and opinionated. Fortunatly I’m good at those.
But unfortunatly my opinion, although valid, is not their concern. Truth is what they strive for. And truth is not found in opinions. Facts, while true in modernity, were found suspect in postmodernity. So maybe truth is what defines a period. What is our slant on what truth is? Shit.. And they say religion is nonsensical and airy fairy.