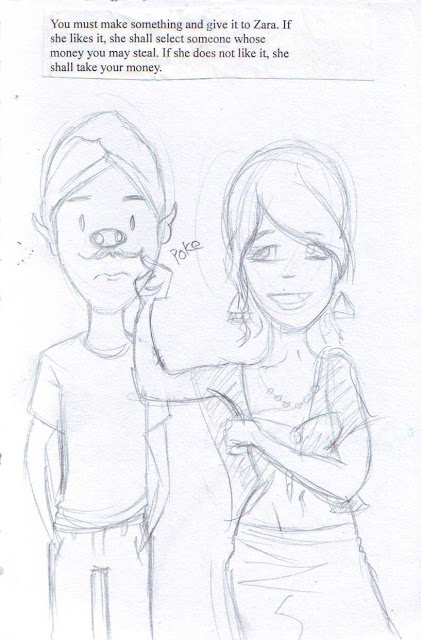 Yesterday I shot a possum. It went down in one shot. Admittedly Phil set me up pretty good to blow the thing away, so props to him for spotting it and everything.
So me ‘n Becky shot back from Pokeno (Yeah, we were at the place with the ice creams. Yes. We had an ice cream. Cookies and Cream. Look, stopping interrupting.)
We were late to Zara’s party, which we totally didn’t forget. It was all Arabian themed. It was all set up like we were part of the Forty Thieves, Doing tasks to steal each others cash. I did a decent amount of tasks, and I apologise to Becky for making her cry by tickling her.
This picture is actually two tasks. My instructions are pasted at the top. And I was going to just draw Zara, but one of her friends, Sarah, was hanging around trying to give me suggestions on what to draw. They were pretty lame suggestions. Moustache, Pig nose and a hairbrush. She managed to make me draw the first two, completing two thirds of her task, claiming that much of my cash.