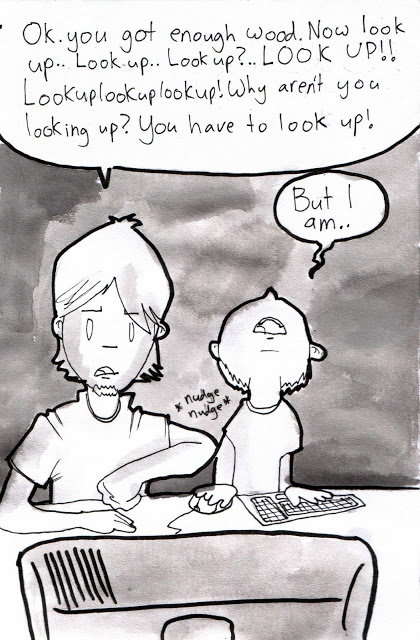 This occured today as I was teaching my nephew Adam how to play Minecraft. This is a big jump for a lot of adults. But for a seven year old who doesn’t normally touch the computer it’s a HUGE step. Ideas and concepts that gamers take for granted he doesn’t understand yet. Even the friendly equantence we have with mice and keyboards is missing. Platform games are hard enough for him, just getting the timing right while pressing multiple buttons to move forward and jump is a challenge. Forget the third dimension! Looking at the keyboard and the screen at the same time is enough multitasking to last anyone.
But he’s missioning it along. It’s quite cool actually. Seeing him get excited about this giant world where you can dig into anything. At this present moment he still has to either have his full concentration on the mouse or the keyboard, but baby steps are good. He keeps loosing the ‘I’ key as well.
Anyway, the scenario in the picture happened. and it was hilarious. He was also trying to barter for my password. “If you tell me your password I’ll tell you Mums!” He said loudly and confidently.