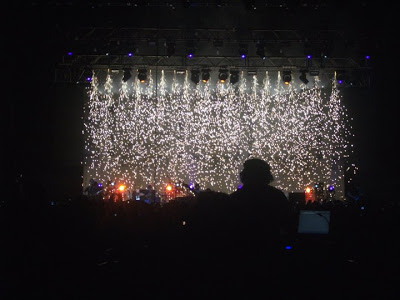 I mentioned this event earlier, but neglected to write much since I didn’t wanna do it without a few pics. So here goes *Launches into the story*.

Twas the 8th of October, nothing stirred, not even an ogre. No wait that’s a lie, the front of Vector was crammed. Paramore was playing there, but meh, I was there to see their fronters, Relient K. Woo! These guys were the first band I ever listened to, and this has only been their second time in NZ, so I couldn’t miss out on this chance to see ’em. Well, I almost did actually, but that’s not important. I cruised in there with Becky, Harry, and… Mrs. Harry. I always forget her name. I’m sorry.
The Harries had seated tickets, but Becky managed to get some standing tickets off trademe. Which was a teeny bit dodge.
We got in just in time to see some random ass NZ band finish up. I remember the drummer looking very enthusiastic. He just looked so stoked to be whacking those cylinders.
Relient K came on and we decided it was time to get the front. Unfortunatly the front was blocked by a million sweaty backs, so we got as close as we could, which was a few metres from the front, but may as well have been a few miles. We got stuck behind some rambunctious big dudes and didn’t move much after that.
During their last song I decided I wasn’t gonna stand idly by and let a chance to rock out publicly slip away from me. I just went nuts. I managed to carve out my own circle to flail in. I was chuffed with that, since a few seconds prior I could barely move, I now had enough space to kick and windmill. Although that did come at the price of a few little girls getting pissed I was moshing in a mosh pit. A couple bros gave me some chest bumps etc though for goin nuts and they tried helpin me to the front.

I kept pushing and pushing, but eventually I just ended up almost passing out on someones back. I was completely wasted. When the song was over I just staggered out. I couldn’t hear anything and I could only just see. I crashed by the sound booth and just lay there until Becky found me. She went off to get me water, They charged her nine bucks for two paper cups. WTF. That’s all I have to say to that. Double U, Tee, Eff.. Mate.

Oh yeah, turns out Keir was there with Bex, and she had been up the very front and managed to get some flicks. Woo. Cheers for that, girls. 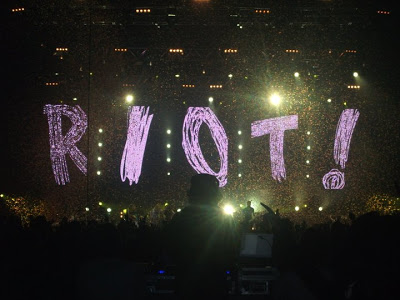 And so happily ends my vaguely interesting story. You can tell I don’t go to these sorts of things much huh.