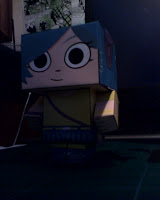 My two week break is up sadly. It feels like a lifetime since I was last at uni… I probably should have taken that lifetime to get my final illustration finished =S. Oh well. She’ll understand when I tell her I had to desperately finish this paper-craft figure of Ramona from Scott Pilgrim vs. the World.

In summary of what I have accomplished over the two week break.

Did a bunch of oldschool game inspired comics.

Also been taking photos of more stickers here abouts. I’ve read about this particular phenomenon before but it has never struck me as much as it has in this picture. It’s the idea that street art changes its meaning over time, or is enhanced by the space. So this sticker was originally of a little sad thing. Now it’s sadness is enhanced by what the weather has done to it (as well as what appears to be someone scratching at it), making it look abandoned and lonely. I think that’s all very cool.