Well it seems as though that ol’ rascal Brian Tamaki is at it again. Him and his cults. Well Boys will be boys. Especially ones who have power trips.

Now first off I was informed the other day that “blogs gave people the idea that their opinion actually matters.” Now I would like to kindly point out that this w
as said over the internet, thus making his opinion more than just a little ironic. Be more self concious next time fish face. Any way! Back to MY OPINION >=( .
Today while driving all over Auckland I have been seeing billboards of Tamaki looking very sinister, grim faced, emerging from the murky depths of the black background. Along with that is the words “A super city needs a super church.” I would beg to differ.
I think a super city needs a super hero. It should be the only way you can label Auckland a super city. Or perhaps Tamaki should dub himself the “super bishop” before making a “super church” for “the” “super” City. Shit. I went a bit nuts with the “things” “there”.
Wow, isn’t this blog becoming a veritable pumping house of current affairs! Makes a change from the fringe culture of graffiti and getting picked up by random druggies in the middle of the night. Speaking of which (Not druggies)! 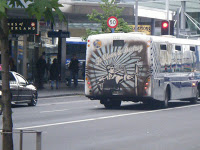 A bunch of buses in the inner city are painted up by the cut collective. I saw this one randomly and was able to grab a shot. There’s meant to be prizes if you can get a photo of five of them.
Well, I thought that this was the 100th post. But I might be wrong since I got a bunch of unfinished drafts from over the last (almost) two years. So if your feeling board, heres a scrap book of them all here today, unfinished for one reason or another.
2/14/08
Vampires day
I went dumpster diving on valentines day and found this old tatty board and decided to deck it out in true holiday spirit. “Happy Vampires day”, Thats what I presume it is. Walking around the streets all I can presume is that its vampires day. All that neck biting going on between happy couples and the sharing of body fluids.
Everyone did valentines cards for everyone. Fun fun. Woop woop.
We leave this camp tomorrow. Thank goodness. I havent wanted to wash any of these clothes by hand. and I’m in short supply… I think thats why I’m not getting as many hugs as before. -_-
I also seem to be catching Jo’s cold. DARN YOU. Darn you to HECK!
So yea, Happy Vampires day girls. I know at least one reads this. ha ha, Hanna.
3/22/08
Splash planet
Well it was rather a dissapointment really. Well the bumper boats were awesome when we went waiting in line. And smacking into Zac all the time on the Go Karts was amusing. Its just that the rides don’t seem to have the speed or excitement of Waiwera. Maybe I’m just getting old and patriotic or something. Also they don’t have any hot pools, apart from one pool which feels as though it is heated with the combined effort of all the small children peeing into it at once. I never realized how much I take hot pools for granted till now.
At one point I went to push Frank down the slide, His matt stayed where it was as he went shooting down. At another point Peaky tried going down the slide without a matt, it was rather pitiful watching him pushing himself down.
Last night we watched Jurrasic Park, me and zac stayed up talking and occasionally got freaked out by Frank and Peaky sleep talking. Our conversation summed up is “Blah blah blah WOA are you awake? he’s not awake, hahahaha. blah blah blah.”
Oh yea, the other day Frank sent in an irish joke to a radio station and won some gift cards to KFC, lol, so we got to use em today.
Jess gave me chocolate this morning! Yay, turns out I did get chocolate for easter after all! Our paintings are starting to be sold now at riverbend. It’l be interesting to see how they go. Emmily and Hahays are awesome as.
Classic conversation between me and the Caltex girl. I try to strike up a conversation. “Oh hi, wassup, its nice to see someone new.” “Oh I’m not new, I have worked here two months.” “Oh, ok, I usually come in here when the night shift are working.” “I am the night shift.” “Oh.. Well in that case.. Did you replace someone?” “Yea, Kelvin.” “Oh aight, was he the fat one all the tall one?” “the fat one about this high?” “Yea yea!” “That was my UNCLE, Hes working the day shift now.” “…. Thanks for the coke.”
5/8/09
well its 3:30 in the morning. Im currently listening to the second proper release cd by greenday, “dookie.” I listened to their first album “Kerplunk” and for the most part the songs were throw away forgetable.
Best song on the dookie album is “welcome to paradise” and maybe “basket case” because its so true.
Why am I doing this? because they got a new album coming out next week. and I think it might be decent. Before now I only listened to the songs that we have been fed like “wake me up when september ends” “Holiday” “american idiot” that sorta thing..
3:50 am. Finished that album. Now onto the “insomniac” album. ha ha. How Ironic. “no pride” The first songs pretty good… “brain stew” is a good change of pace..
4:23 woops. missed an album. their first ep “1039 smoothed out slappy hours”.. The first song “16” is cool.
10/22/09
My eyes are tired. I should sleep. Finished my essay and handed it in this afternoon. Things are winding down. But this is only our world. On the dark side of the sun a world is being birthed.
Oh I think I figured out why I didn’t post these before.. BECAUSE THEY SUCK.. Yes believe it or not my posts go through quality control. We usually ignore spelling errors though.