So much to type so few that care

By Izak Flash on June 12, 2009
Hmmm, A number of topics I would like to type about but Probably won’t: Celebrities, and how they meddle in affairs that are not their own.
the mayan 2012 end of the world plan.
Different generations use of the internet… Actually I will talk about this one for a sec. I was having a conversation with this dude NormalAlex. This was just as I had revamped the blog, and was getting some critique about it (He was quite helpful, although we both thought each others templates were yuck XD.)
youl notice at the end were both rather perplexed by each other. For those who can’t be bothered reading our interchange, he wonders why I refuse to put ads on my website, and Im dumbfounded as to why he would find ads interesting. I don’t know if its my anticapitalist temprament (Lol) coming through, but I don’t feel as though putting ads on my blog (Or anything else I do) is a good idea. I did back in the day, but now I feel as t
hough I’m “selling out” or whoring my sites if I do. People get enough advertising as it is, I do not feel the need to force more of it on people for personal gain. And besides It would make my site look fugly.
On a slightly different topic Check out the flicks of my Sculpture at work on campus, sitting in its lofty perch, provoking ideas of bullet time and some sort of grotesque spiral appendage coming off the psychology units balcony. Ha ha. 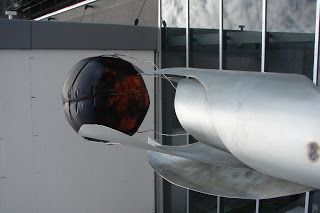 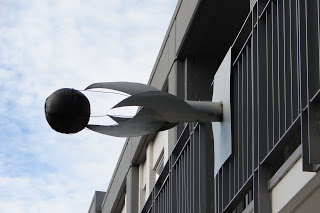 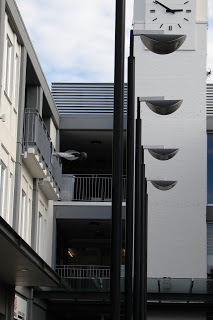