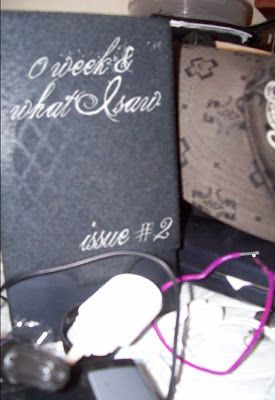 I would like to start this post by saying that I think the Cover picture I did this time is freakin mint. It was unbelievably easy to do. All you need to do is be incompetent with cameras, and fairly confident with flash. Tada.
This week at uni has gone real quick. A whole new range of experiences has come out of it all. Drawing for designers. Man, its really given me a flow now, that I never had before. We’re doing gesture drawing at the moment. I’m sure Phil could give you the entire history of it. But pretty much its getting the essence of a figure. Your not drawing a person, but an object in space, and it all flows. Its quite fun, and it makes the most novice of drawers experts. Because now they aren’t held down by fiddly details. It took me a while to get my groove on, starting with some worrying results. But Its all G now. I hope its what Kura (Our teacher) is after. Cause if it isn’t I’m screwed. Ha ha.
Critical studies, lectures, was fun. I’m suprised that the “There is no absolute truth” popped up so quickly. But it was fun to muck with, because (As I said to our lecturer in my smart ass type fashion) If there is no absolute truth, and that statement is absolutely true, then it cancels itself out. I’m not sure the guy was into the philosophy at all either really, just teaching it to us for a different point of view. But meh, twas fun.
I think its design for designers, or whatever, is gonna be the most difficult. Our assignment is called “Book Of Days.” its all to do with typography etc. And it has to be themed around our name, which sounds like something they would do at primary school. I’m pretty sure Kura (Same one from life drawing) is using us as an experiment in creativity, by not giving us much details.  Frustrating, and a bit of pressure, but hopefully we will all yeald good results.
Mac lab.. Psh, pimps, the assignment is the soonest, we have to fuse 5 pictures together with photoshop to make a colage.. Ok the spell check isn’t working. Don’t use google chrome people, it sucks ass.
Me and Matt are gonna sneak out some night and take photos of junk. Should be mean fun.
I also notice I drift a lot. hmmm.
I would now like to take some time out with a short study of some graffiti. Notice this first example, the green, badly written one at the top. “All taggers are gay” written by someone who obviously hasn’t done graffiti before and who obviously doesn’t see the irony in what they have just done. 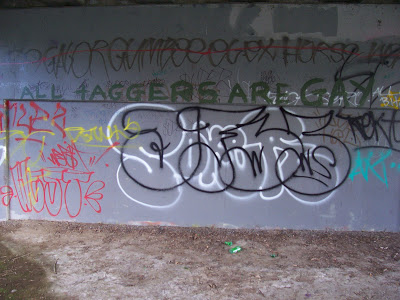 These following pictures are typical of what can be found on walls infested with graff. And it doesn’t help their case in defending themselves from any possible accusation with gayness. 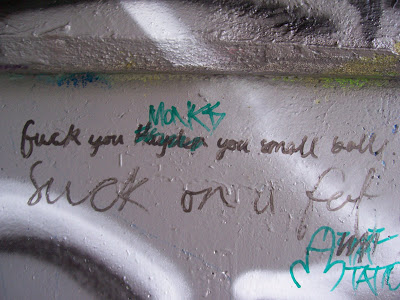 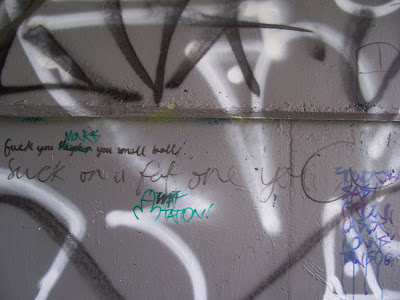 If you start to grow an obsessen for drawing over inflated penises I suggest you change your meds and seek a health proffesional. This last one I just threw up because it looks cool. 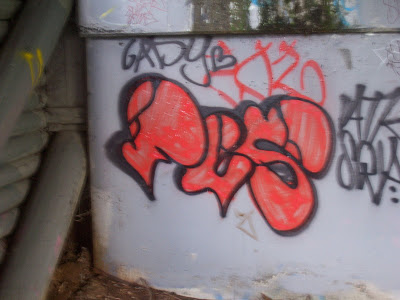 5 Thoughts on Welcome to uni. where you may access anything you may need.