Titles are gay
what happened in clevedon a while ago.
Uncategorised March 2, 2008
Share 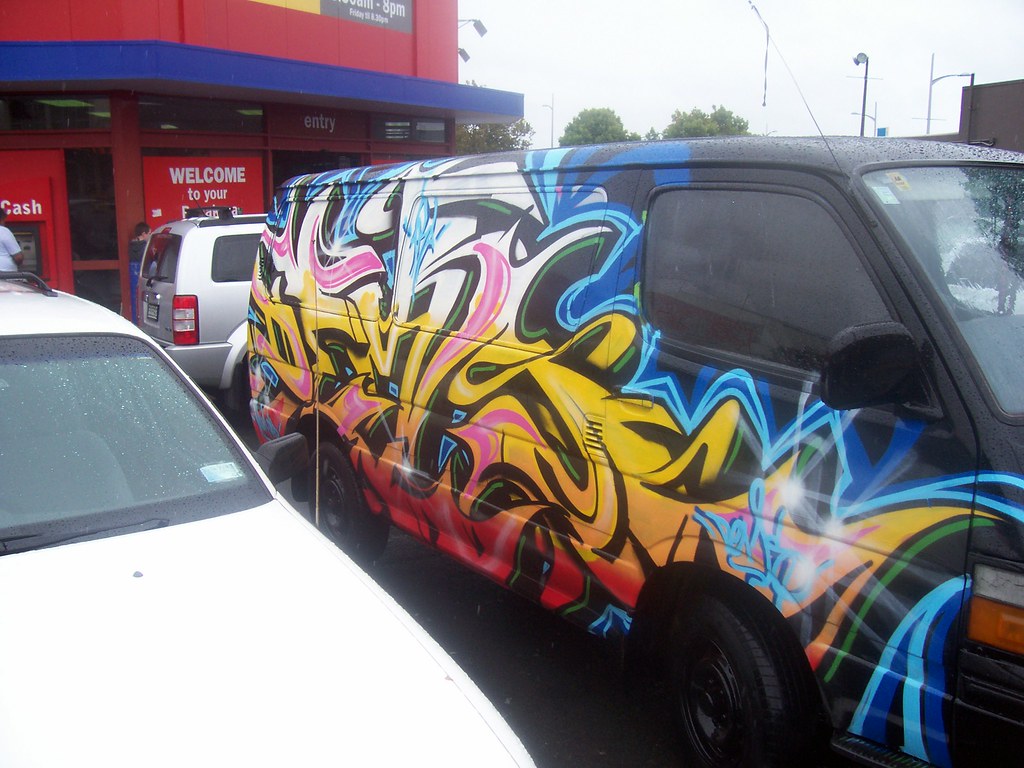 I’m A little gutted. I did a huge mass of writing on one of the other laptops, its now totally out of my reach somewhere. Hopefully Ill be able to grab it at some stage and give you some more details of what happened there. Just as a little teaser of what happened in the two silent weeks of no internet access.
Snorting marshmallows, salt, pepper, milo, citris acid in the eyes, a bottle stuck to Zacs face in his sleep and a spoon fest in the middle of a field. 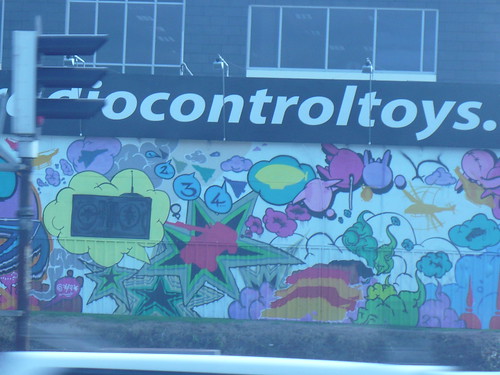 I’ll elaborate a bit more about clevedon for ya, to fill in the gaps of what mum talked about yesterday. The rock climbing, ah, what to say about the rock climbing. Imagine going to a rock climbing place and being able to do whatever you liked. Climbing the ropes to the very center roof. playing crazy ass games when you are attached to two ropes leading up to the roof, running towards the wall, while four other run past you holding the other end of the ropes, just before you get to the wall you go shooting up into the air backwards. Me and frank climbed half way up and tied the rope so we were both dangling half way. We could jump around and stuff. It earned me a few nice bruises. 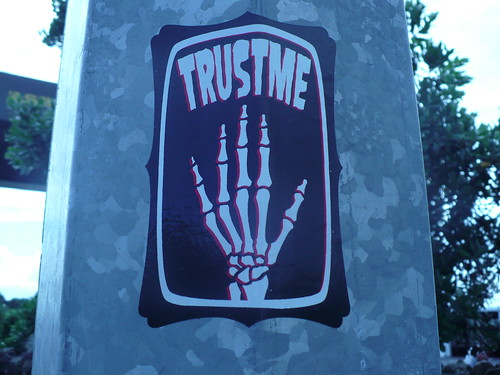 Clevedon street art is pretty non existant. There is some metal sculpture outside a cafe if that counts. Cruising around South Auckland I found Some aight pieces. But on the whole, the graff over that side of town looks sorta messier than usual. I found a Component robot sticker on the back of a car which was pretty buzzy. I found a stencil by a guy called Bonus. Over by silvia park I found another trust me sticker. There was a fence near this round-a-bought which was tagged every morning, but a few hours later when we went past it would always have been buffed out. They are really Busy little bees when it comes to whiping out the tags. I Don’t mind much, it was just scrawls anyway. 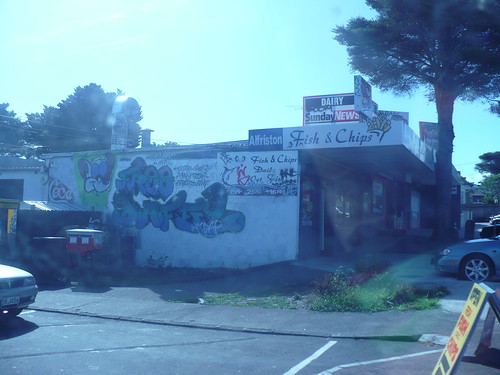 Ok so we did a six hour drive to hastings. We got to meet Eddies girlfriend, shes ok I guess. To entertain ourselves on the trip we would ask Eddy if we could stop off at (every) McDonalds so we could take a leak. It was Lol worthy. Funny thing was Peaky was busting the entire time but no one believed him. We saw a Stencil of Peepshows, and while in hamilton I saw an OBEY sticker. Who would think that OBEY would have spread all the way to New Zealand. Frank fell asleep in the car with his mouth open again. I took it as an opportunity to dispose of my receipt by ripping it up into small pieces and dropping it into his mouth.
We stopped off at Taupo For lunch, it was filled with tons of people for the iron man marithon. I convinced Frank we had to snort Tomato sauce. It was rather tangy. We went to the bathrooms to clean ourselves up and I decided to blow frozen coke over the door onto Zac. He didn’t know there was another guy in the cubical beside him and he was like “Aaaaaw, this is not good.. This sucks!.. This is gonna stain! I hate you guys.” Which with hindsight could sound pretty bad. Anyway he came out and I went in, frank threw water over the door onto me. I just sat there dripping for a few seconds, then let out a dilayed high pitched shrill scream. fortunatly for me a guy was coming through the door when I screamed. He was like “WOA. That scared the shit out of me!! What was that!? Was that you??” he said to frank and J. He was giggling my head off in the cubical.
Arriving at Hastings I soon realized Im living in the middle of nowhere. We stayed at riverbend church, which looks more like a camp which happened to have a church on it. Me and eddy got stuck on the wrong side of the river at one point cause peaky tied up the barge. We had a two hour walk, cutting through orchards etc.
Yesterday we got to check out where we will be working. I think it should be all good. I get picked up tomorrow at six thirty for my first day. Today the group got broken up to be billited with our host families. Hugs galore and single tears shed. We havent been away from each other for an entire month. It really is quite sad. Me and Peaky have been put together which is cool. Our host family seems nice enough. I got broad band woop woop. 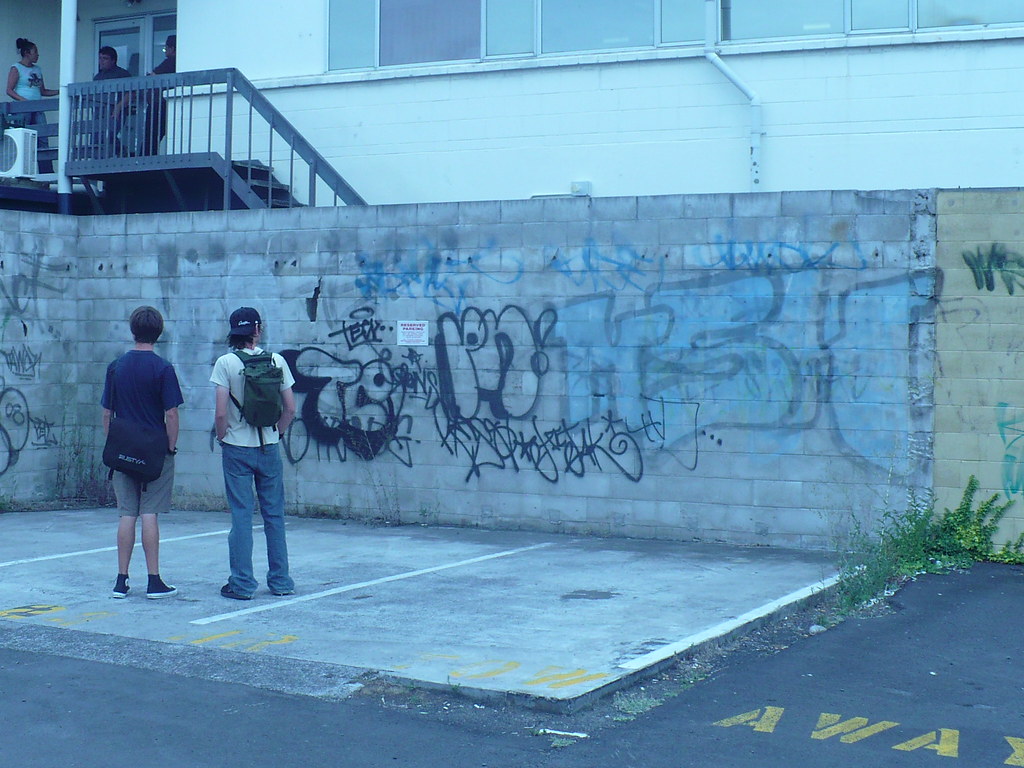 1 Thought on Hastings and work